Caught a A ballgame today and what a wonderful day it was. Mitch Hanigar was doing a rehab stint and during his first AB, ripped a solo HR into RF. Alberto Rodriguez followed later that inning with a 3 run blast. However, by the time we snuck out around the 5th, the Sox were behind.

I try to remember to go to this game each year, since we are not far from their home stadium, but I don't always make it. You can bet the years I didn't go, someone's RC is included! I am not sure if I got the Julio Rodriguez set, but I know I missed the Chris Taylor set for sure.

Anyway, this year they were randomly inserting signed cards into the giveaway sets. What a great idea that I am surprised has not been used yet. Granted, most of the fans coming to the game are probably not collectors, let alone Single A autograph collectors, but a small percentage are.

We had 4 in our party and received 1 of the limited autographs. That set was in a team bag and had a sleeved auto card in the middle. The other 3 sets were still factory sealed. Turns out I got the Manager, Eric Farris. I guess it is better to get a guy who tasted the majors, then some single A kid who never makes it out of the minors. However, if someone from this team even makes it to the MLB level, or does so and becomes a fan favorite or better yet a legit prospect/star (like Rodriguez from a previous team), these cards have some serious potential.

I didn't check with anyone else to see if they got a signed card and if so, what it was numbered to and am watching ebay to see if any appear, but my Farris is numbered to 10 copies. The sponsor, a sportscard shop, put little clear stickers on the signed card as a COA. Greta idea for the autograph collector. Imagine putting that team set together though!! 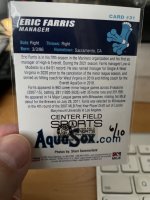 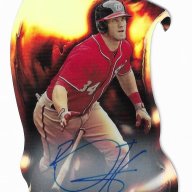 I had no idea they did this! Not bad at all hitting one of the autos. I was at the Crown Bar today in Tacoma when I saw the M's were down 6-0. Finished my drink and spicy chicken sandwich and I was out! Glad to see Hani starting his rehab assignment. Now, if we could only get him and Kyle Lewis back on the field with Julio, could have something going!
You must log in or register to reply here.