He said- and I quote- " if it isn't Justin Herbert or Joe Burrow that I can sub- its yours"
So anything not those two players - comes to me. Works for me !
I'll break anyone's box and sub some stuff for free


Box pictures as best I can below. I am sending my friend to storage in MA soon so we may see more older boxes soon !!
He's just waiting to get his shot and he'll go the week after. I'm excited !! 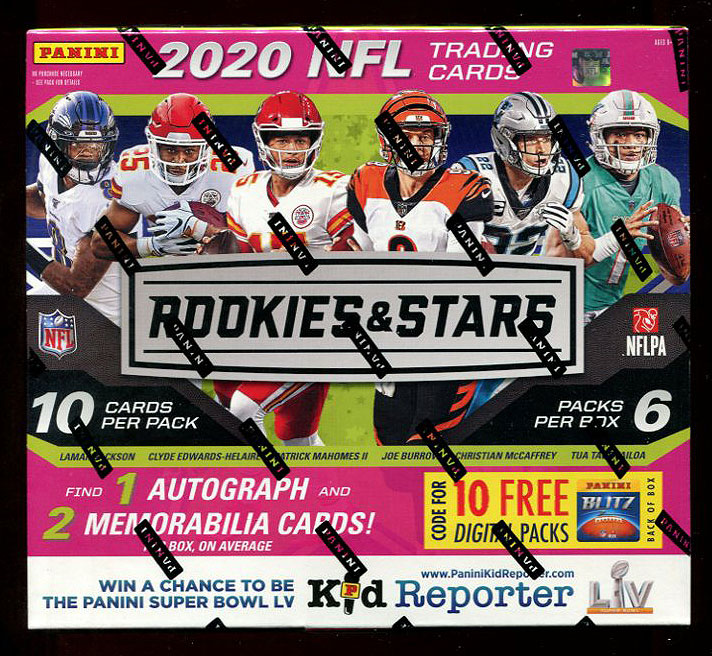 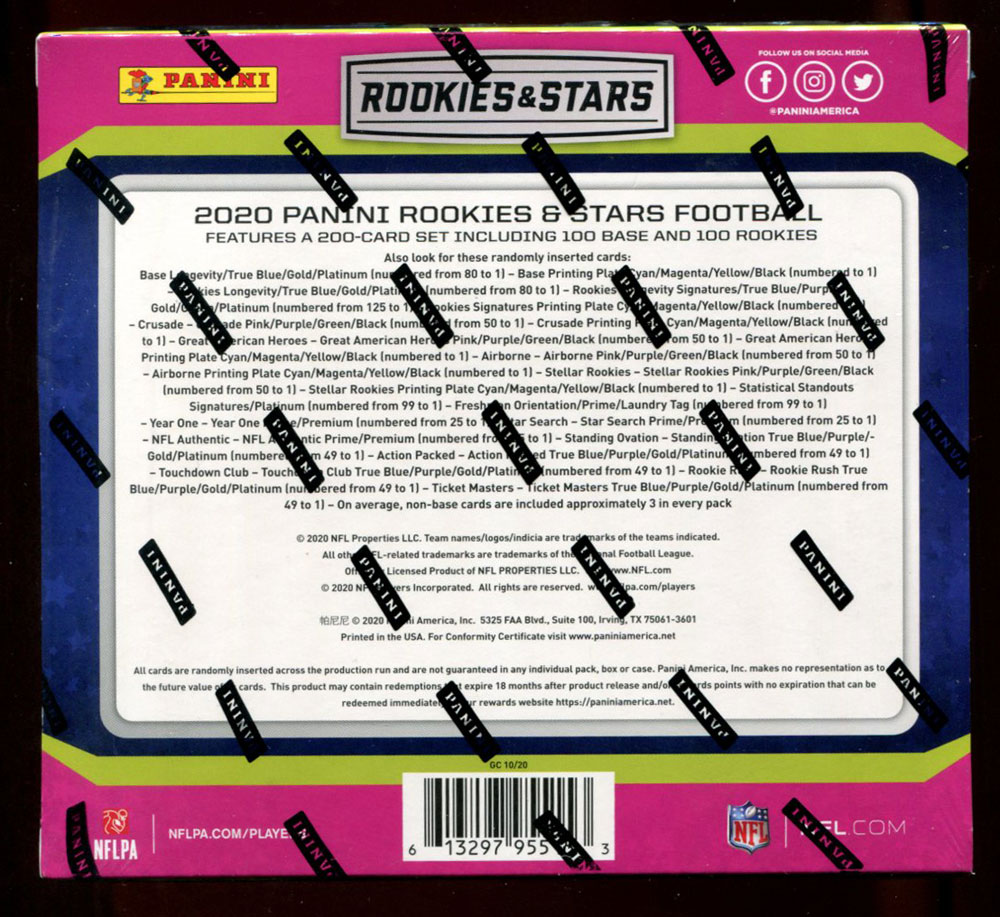 Had to take pictures etc before ripping into said box = so here's pics of the opened box and the packs as always
,
, 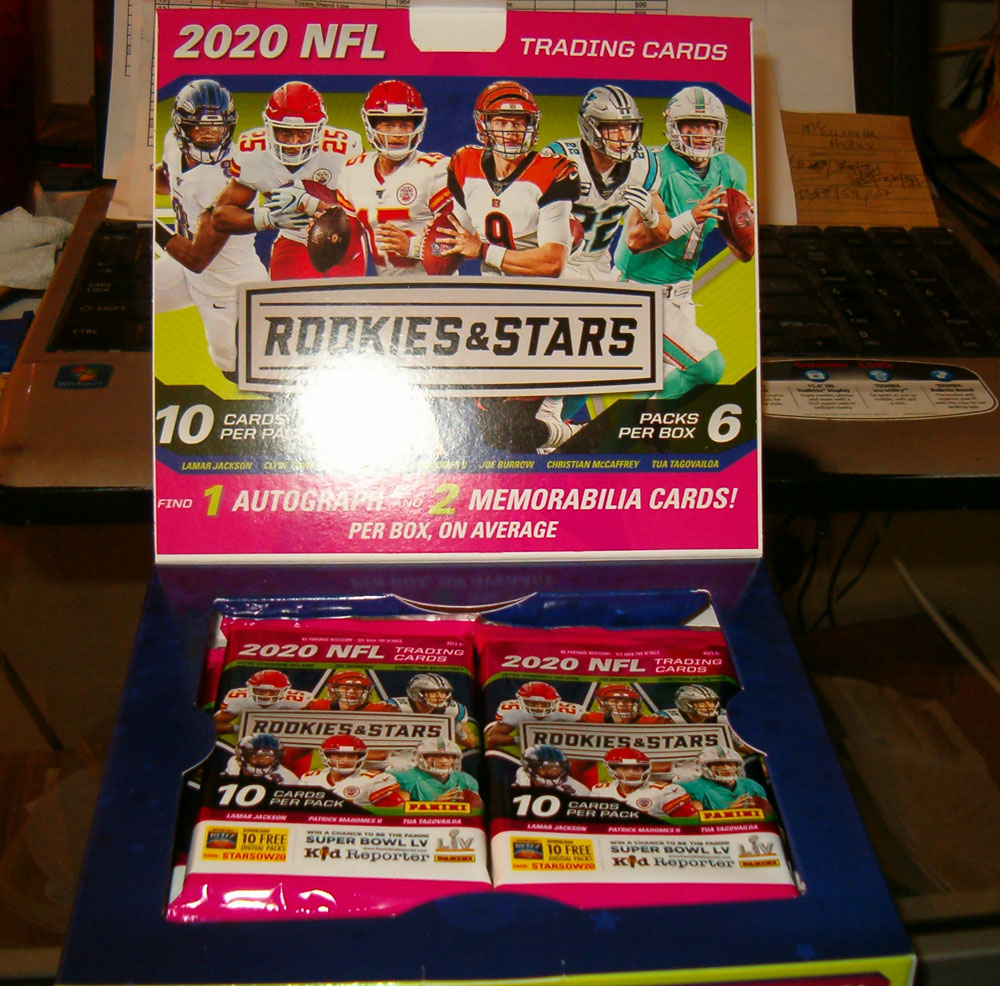 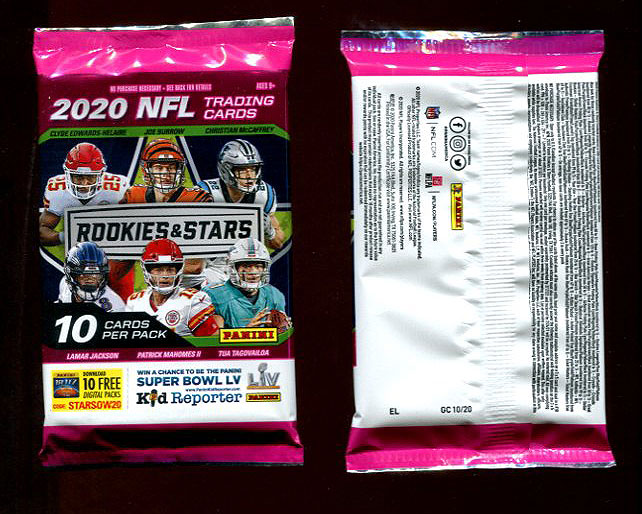 OK back from errands second part of the box


Me likey that pack

Looking forward to the photos

MrMet said:
Looking forward to the photos
Click to expand...

Will post photos when I get home finished scans just b4 heading to work last night.

Pics from the others days box break . Both the black/gold and silver/blue longevity look great in person
Mr Burrow is heading to grading per its owners request, as is a few inserts here I'll sub also.
,
, 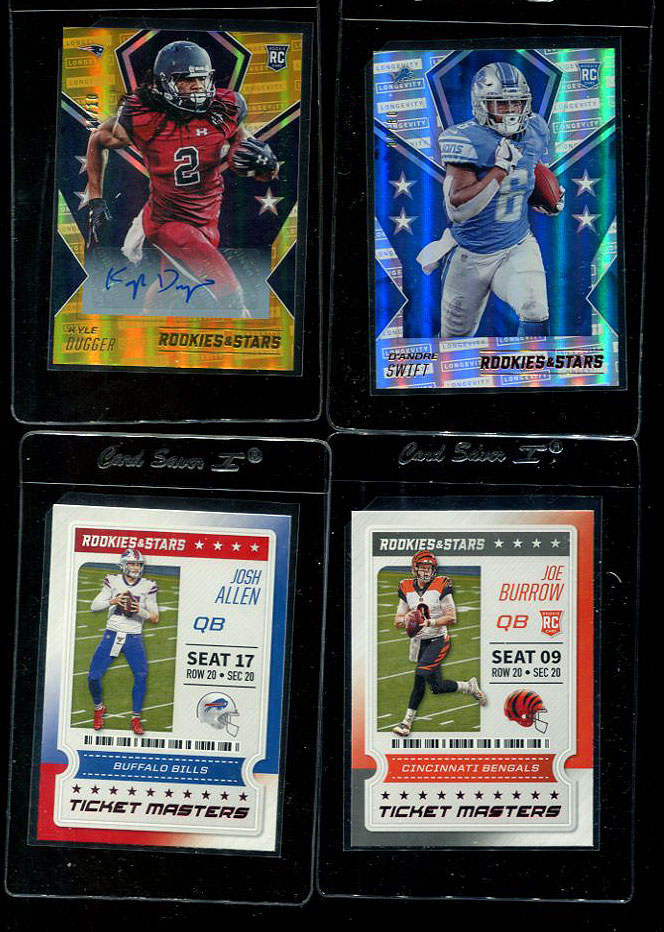 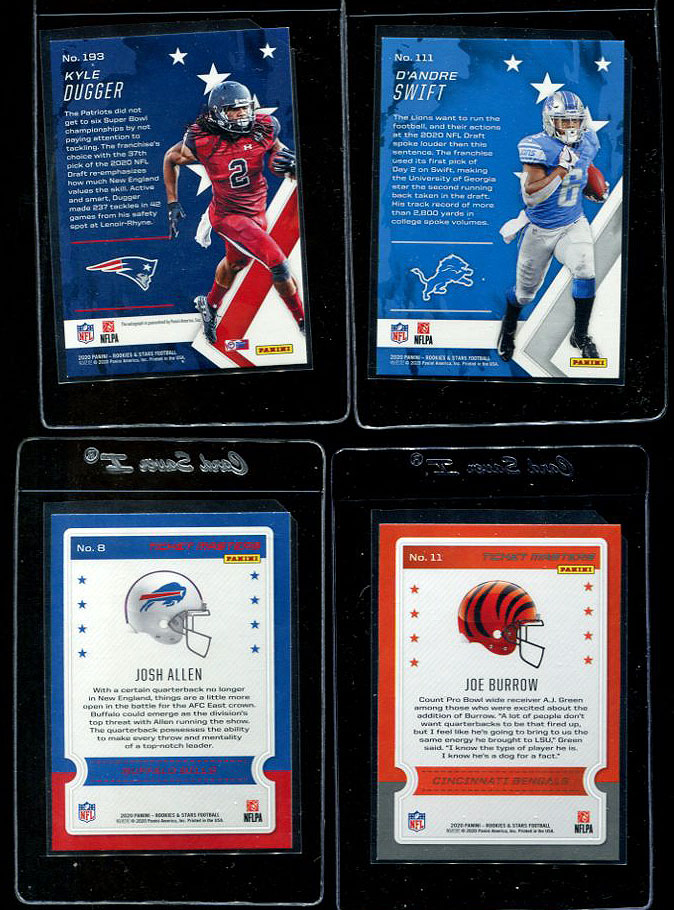 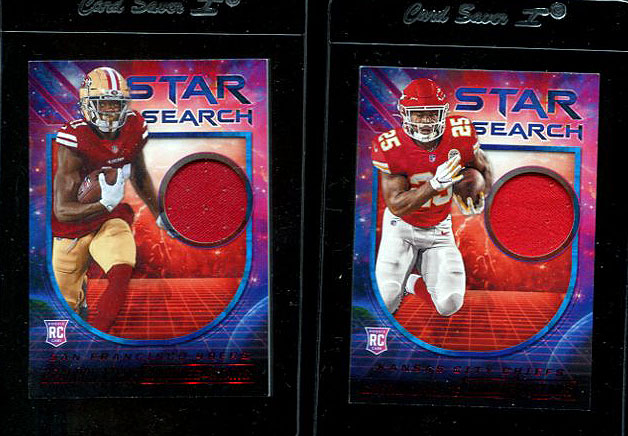 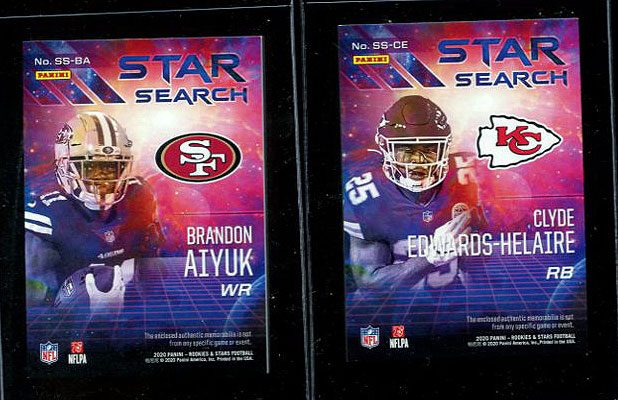 Nice looking cards, I really like the look of those patch cards

NOTE:WILL NOT BE OPENING TIL MORNING - just posting this in advance to save myself time in morning

So a box finally was able to be sent from storage - and it had all football. Ah well was hoping for some more of my baseball. At least the storage units getting less in them. Gonna cost me some funds over the next few months but will start emptying more out.
First up will be a box of 2006 LEAF ROOKIES & STARS LONGEVITY FOOTBALL
These came 5 cards a pack and 10 packs to a box

I purchased these back when not for the hot rookie Reggie Bush ,but because I was looking for my Tom Brady
Also wasn't chopped liver either on the rest of the players, as I wanted both Manning's, 2nd year Rodgers, Favre, Big Ben etc etc. So I'd buy the box and set aside and when football season came I'd pop open a few boxes.
If I hit a Brady I'd slab and sell. While baseball was my main deal I did dabble in football as well ( never hockey or hoop to my detriment)

The package contained 1 box of Longevity and 3 boxes of the hobby boxes ( hobby has 24 packs w/5 per pack)
I don't have time tonite to open anything just scanned a few pics of the Longevity will open in the am
But prep for a few weeks of those 2006 Leaf R&S boxes apparently. I'm not gonna make him go back for a week or more
Too much stuff to go thru but we'll start up again emptying the storage now that things look better for him.
Wonder if I have any sealed 2005 ?? Guess we will find out as he goes thru it !!

Pics below of the box itself-- like I said will open in morning just excited somethings here again after nothing for months
Glad both of us are feeling well enough to start in on this again
,
, 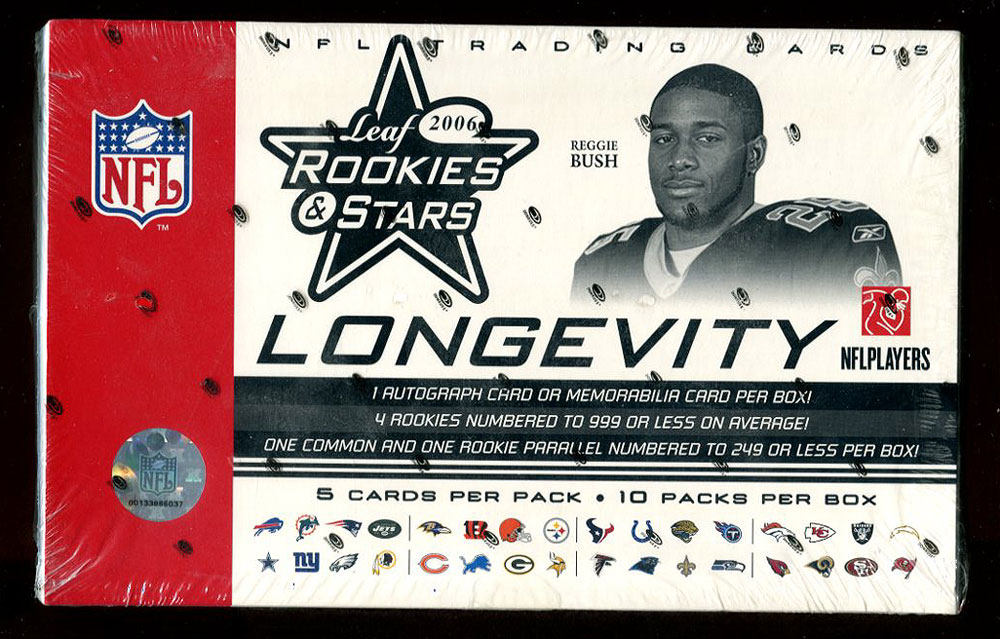 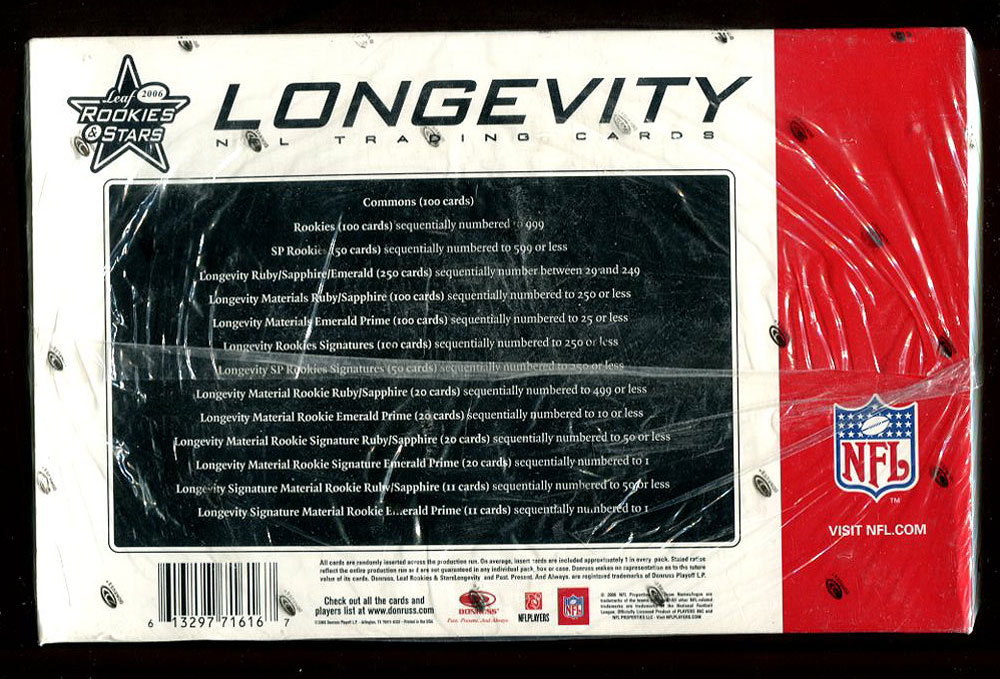 OK folks sorry if your not awake Weds night Mar 31st at 9 pm PST but now is when I have time to open the box
Box pics then will scan the packs as usual. Already showed the outside sealed pics above 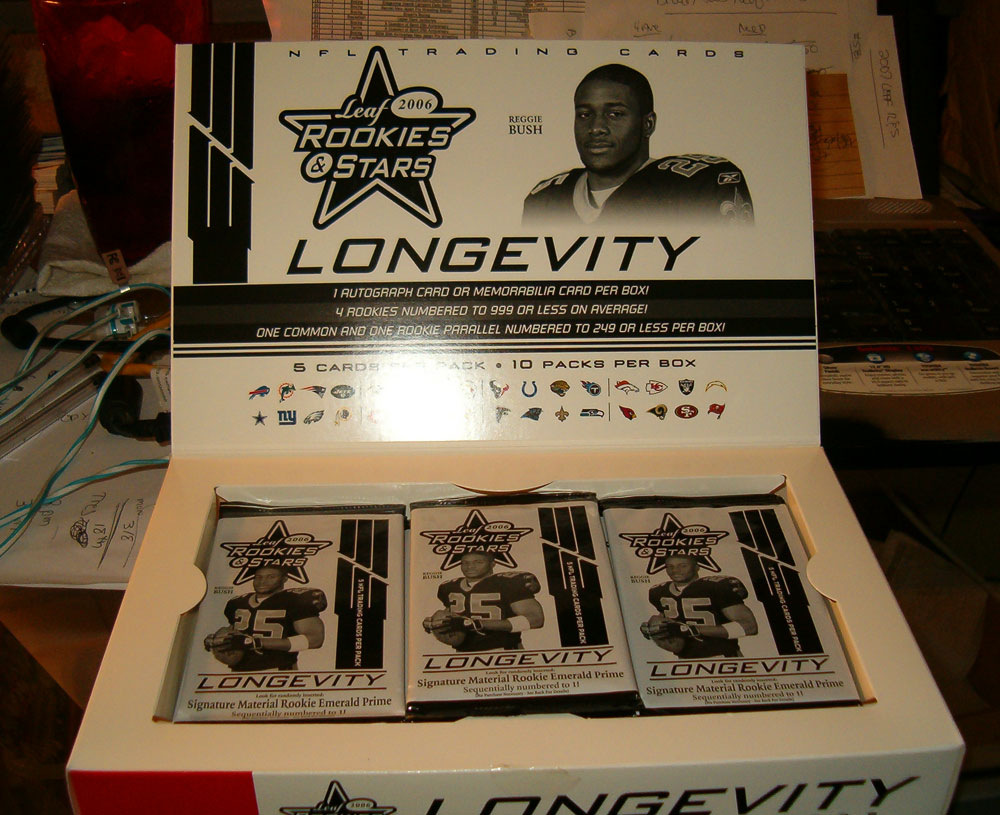 Pack pictures below. And to show what the normal hobby release we will break later when I do those 3 boxes over the next few weeks
I took pictures of a normal hobby card ( left) and the longevity foil versions (right) of my Tom Brady from that year 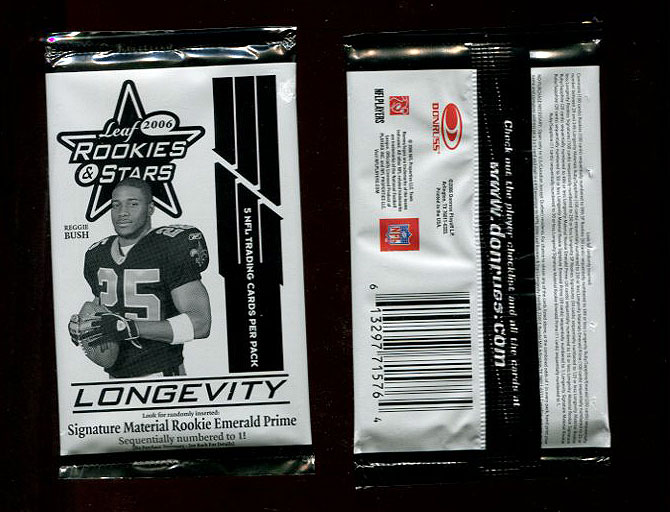 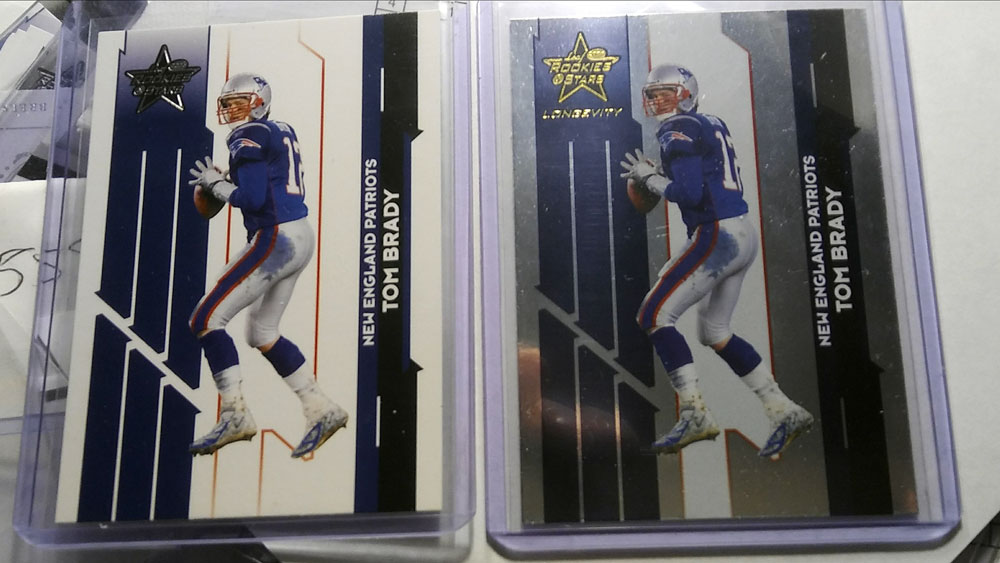 Lots of color in that section !!!
J


Looks like that box ended with a bang- interesting break !
Will post pics when I can scan tomorrow
If anyone is set or team building advise just pay to ship to you and I'll send in a box

Nice Brady's! Thanks for sharing the breaks with us. Love this thread.
J

Ct Sox Fan said:
Nice Brady's! Thanks for sharing the breaks with us. Love this thread.
Click to expand...

Already owned the Brady cards Wayne- those are just examples of what the break cards would be like, and how the LONGEVITY I just broke will differ from the normal Hobby LRS.

And picture of the box I'll hopefully have time to start in on later today. My bro said he'll go next weekend (Apr 10th) so looks like more boxes will be en route. Which is great since PSA closed for 3 month will give me time to catch up scans, mail stuff out, clean up around here, etc etc, etc.
,
,
, 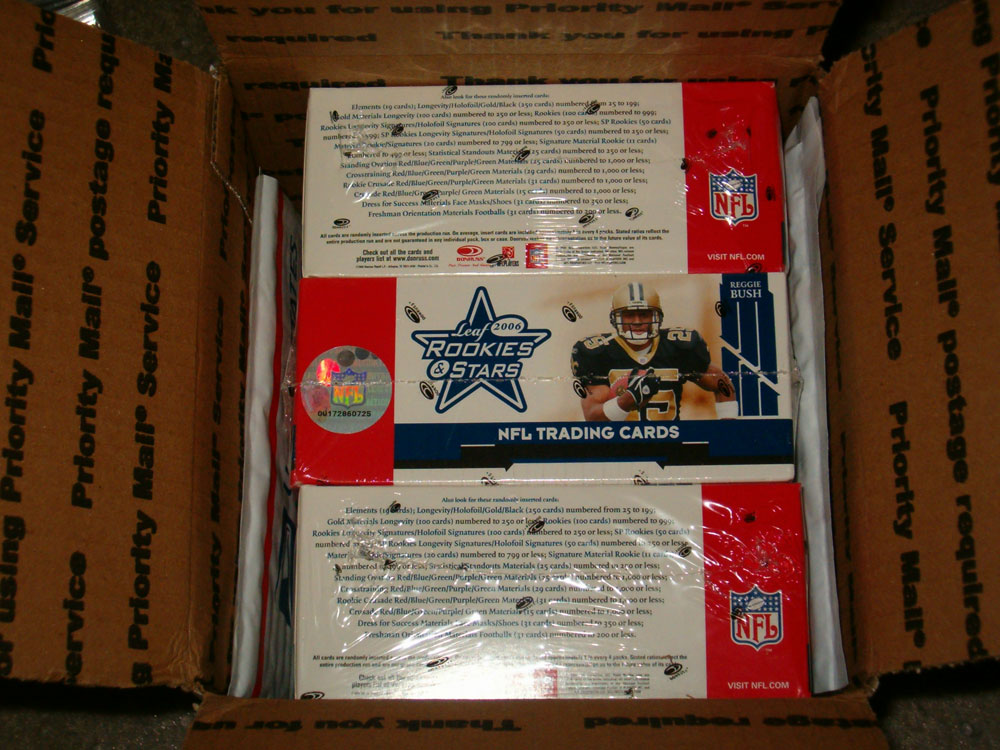 Pics from that 2006 LEAF ROOKIES & STARS Longevity box
I'll scan the new base boxes in later this weekend
I'll be just keeping just inserts from this series so if anyone set builds see me
Will send you a box of base from these 3 boxes
,
, 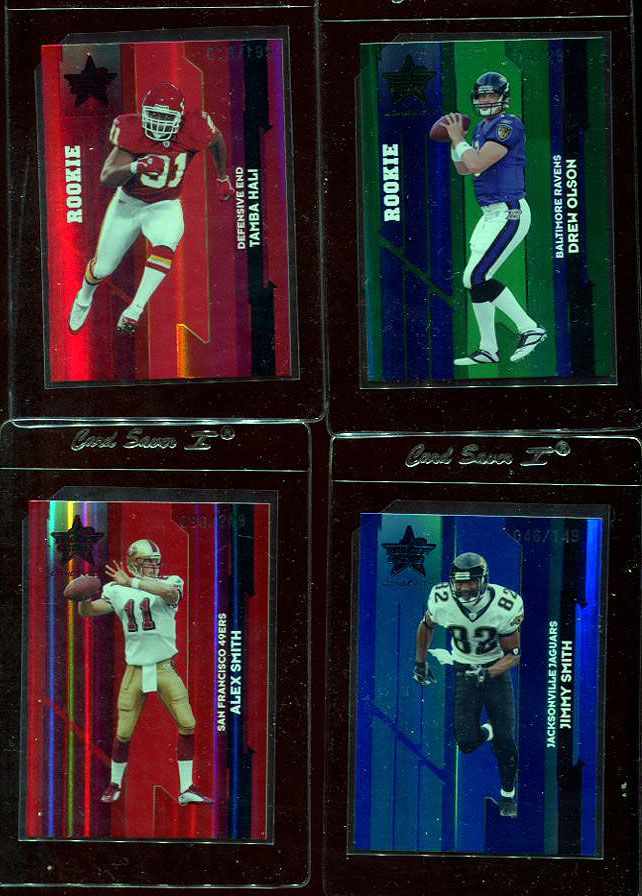 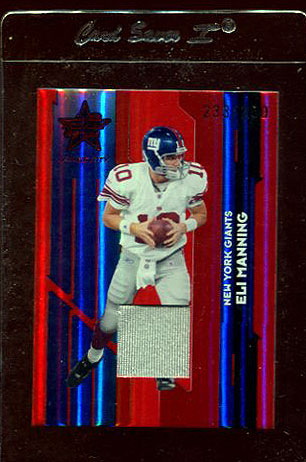 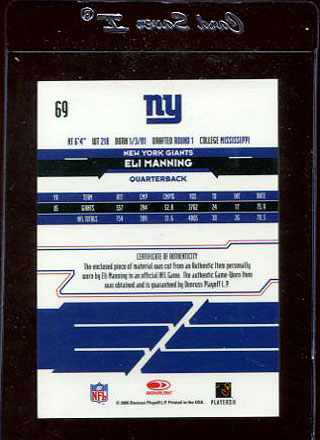 OK folks now on to these 3 boxes of Hobby 2006 Leaf Rookies and Stars Football I posted the pic of the box of 3 a couple days ago. They come 24 packs to a box and 5 cards to a pack. usually have 4 inserts or so with 1 game used or auto per box on average.
Box pictures as always below. I have 3 total boxes gonna open one that appears to have some corner damages
Will only be keeping inserts or cards I need so if you need base stuff for sets advise you pay shipping I'll mail free 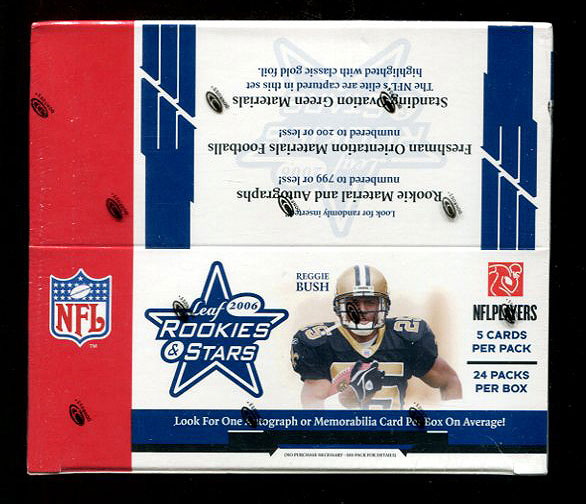 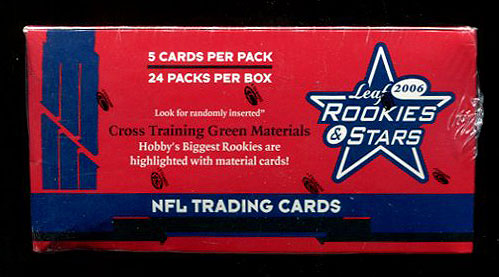 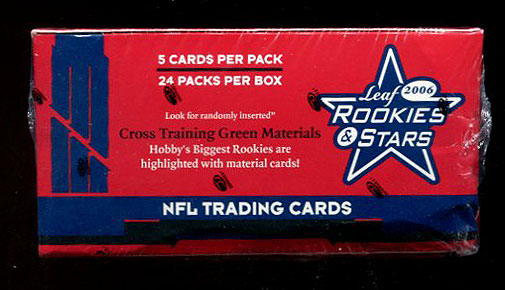 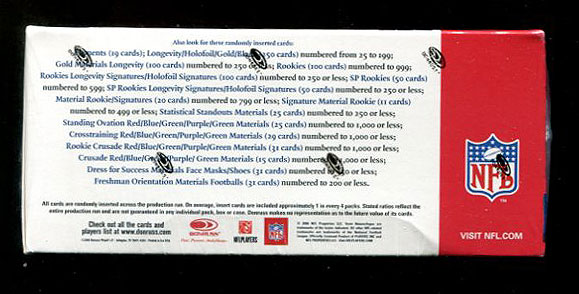 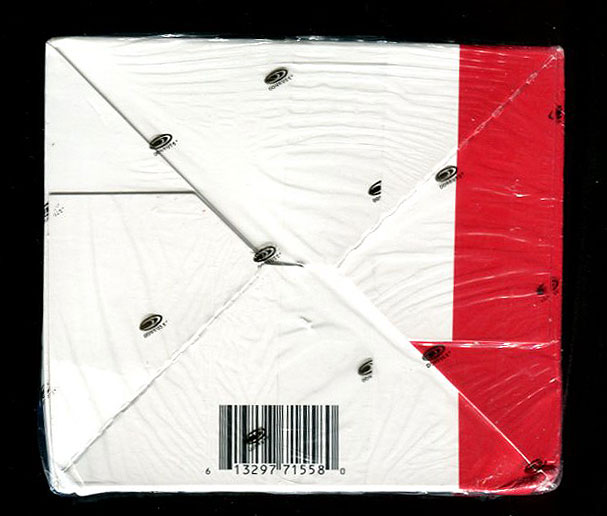