Interesting break. I wasn't thrilled with that boxes damaged sides here's hoping the other two are better
Will post this boxes inserts when I can
J

First- a correction on one of the packs broken on that first 2006 LRS Hobby box. I mistakenly posted a dupe post of a pack
Turns out I duplicated one for some reason and set aside one- because the pack was damaged

The recent 2006 LRS Hobby box pics. Did not hit me that all were Blue / Silver items til I scanned them in
Oh well. I will be posting next weeks box break in a bit got a newer box sent to me and my own box came in from home
,
, 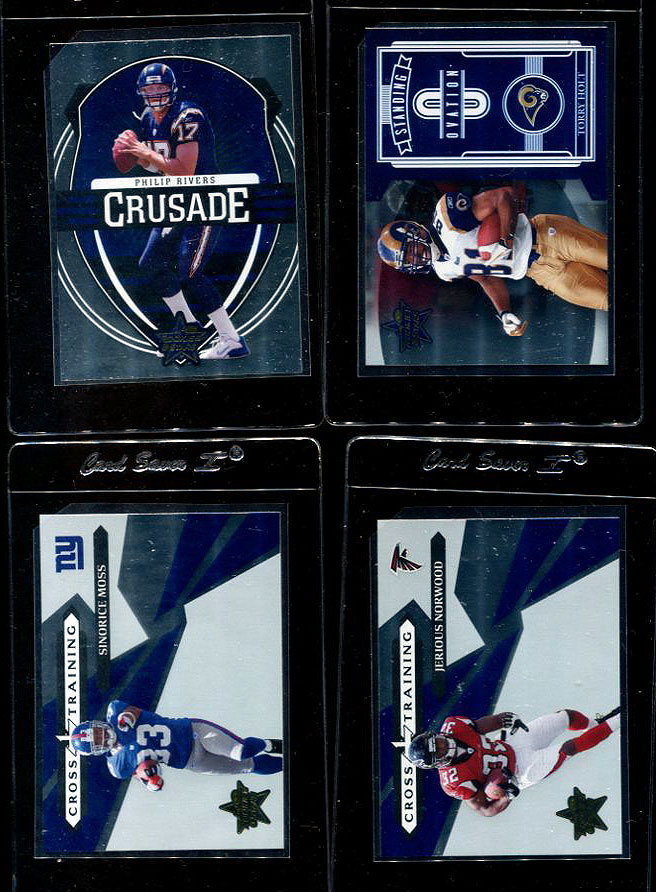 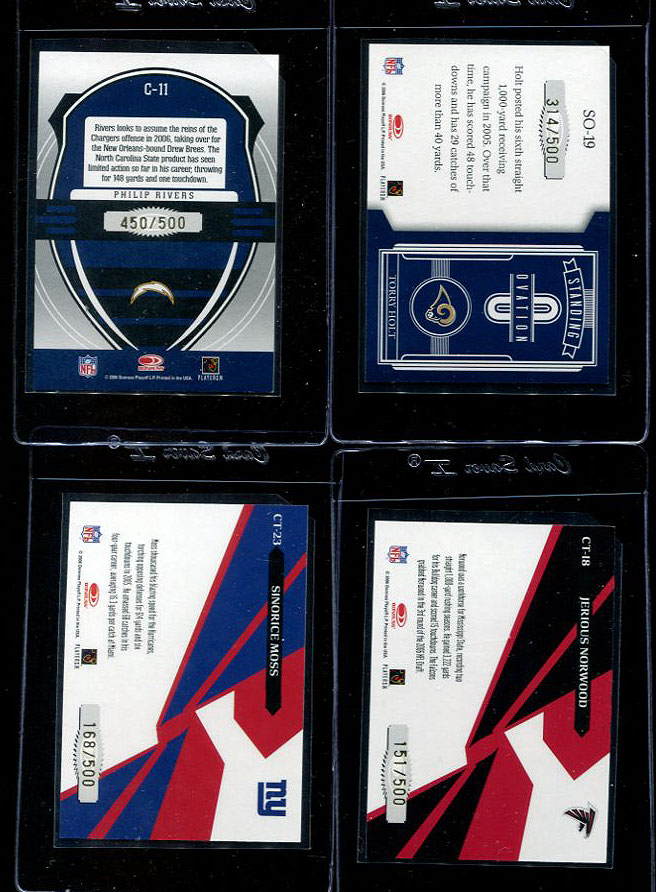 Been told he wants Acuna, Soto, Tatis and I get to keep anything else. Works for me of course 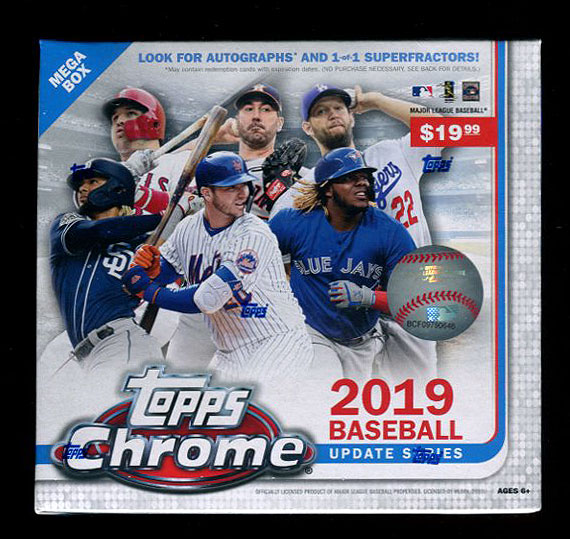 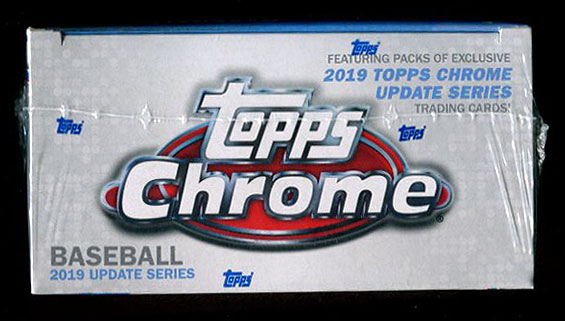 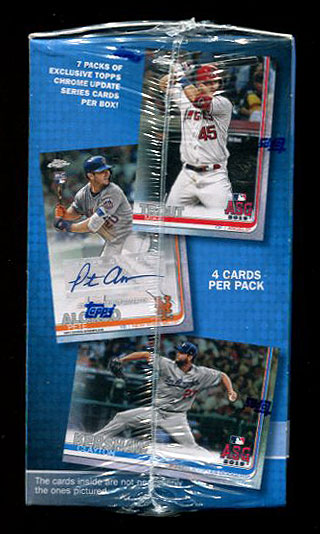 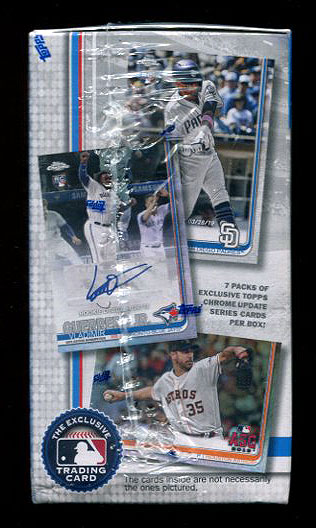 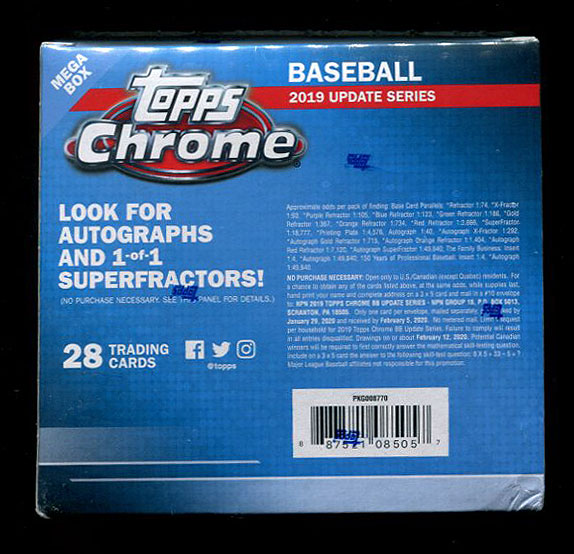 OK folks here we go the 2019 TOPPS CHROME UPDATE MEGA box configuration
7 packs to the box 4 cards to the pack
Pack pictures are below
,
, 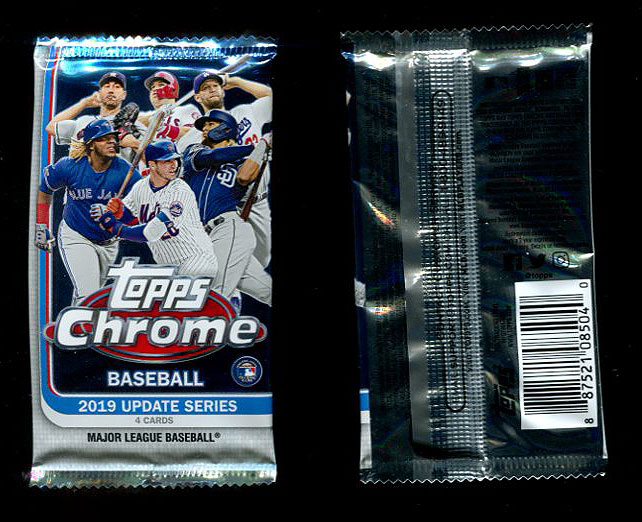 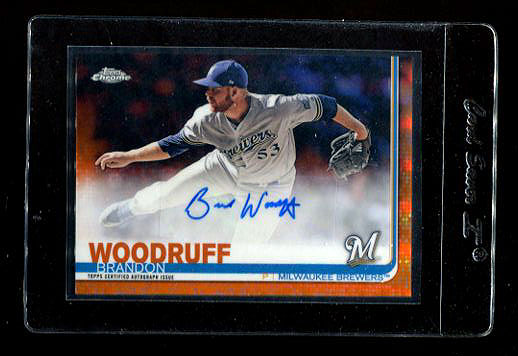 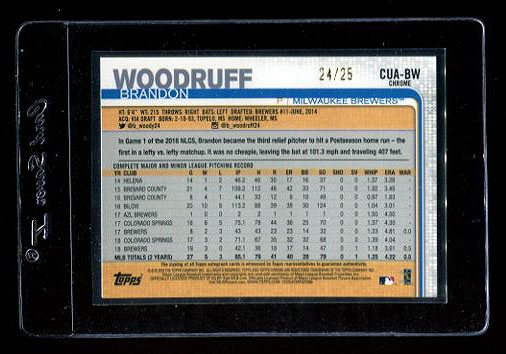 Nice pull on the orange. So why do they call this a MEGA BOX
J

Folks sorry on the woodruff guess I had the scanner at 96dpi instead of my usual 150dpi . Ah well

Have another box that came in unexpectedly - same guy as this Topps Chrome box came from
He's cleaning his place up said "keep everything broke enough of this crap already"
I have more football and baseball boxes to break also hard to keep up when new stuff comes in from people who know I take great care opening products up.

So we have a 2012 Leaf Rookies & Stars retail box
I'll have to look who is here only players I'd want are Luck, Manning, Brady and Kuechly
Pretty sure Wilsons not in here ,but if he is will go to my peep Kevin ( @Pinbreaker)
Believe this is what we call in the industry a "gravity feed" box you'd see at Walmart or some other chain store
I took a bunch of packs out as it was too heavy to take the pics without doing so ( 36 packs in this thing)
Also took out internal inserts that kept the packs down bottom and opened it so people could see
I'll open it later today 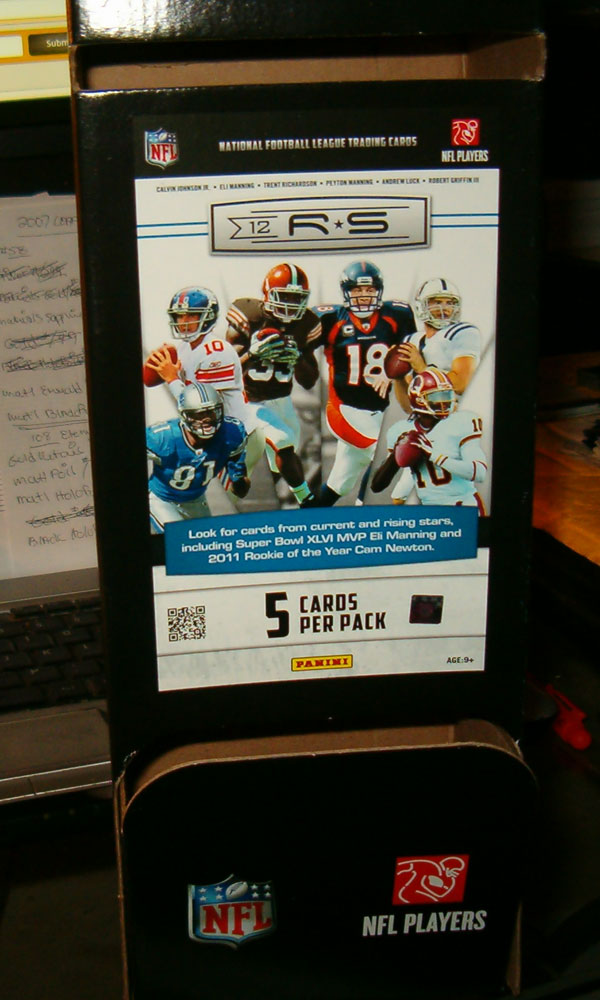 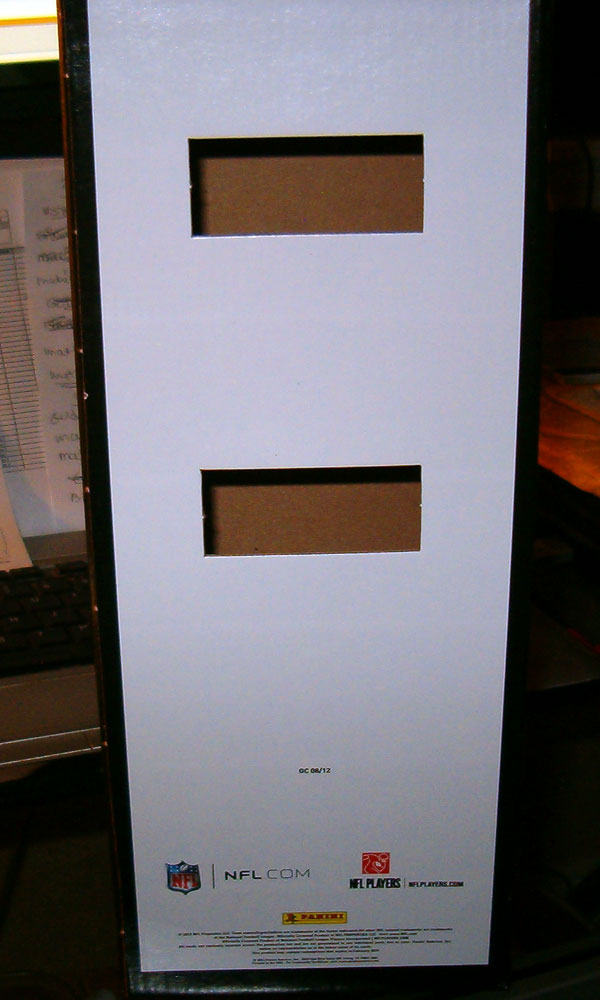 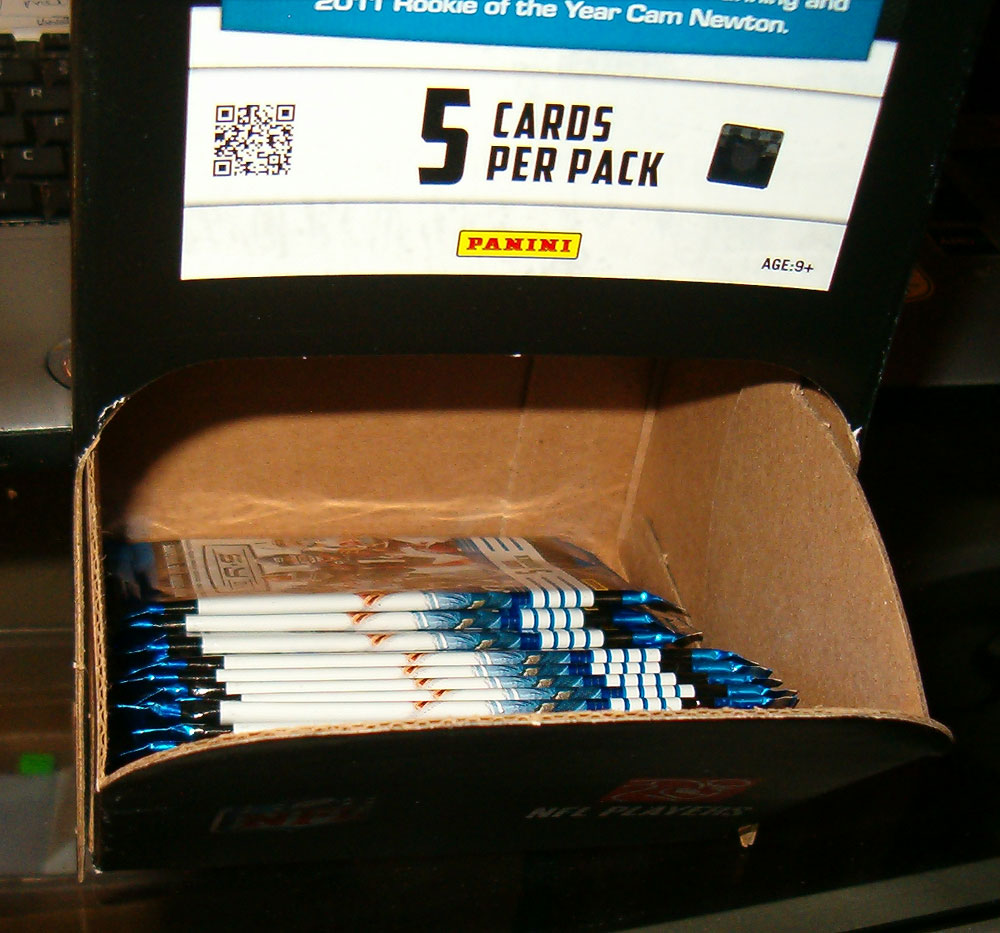 OK folks 36 packs w/5 cards a pack- I'll break 12 packs at a time as i got other projects to work on
Pack pics as always before I start busting
,
, 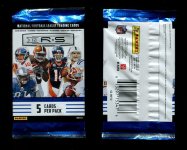 Another 12 opened while I had the chance

Nice pack that one !


More later on folks they take forever to open
J

Fun break not a lot I'll keep but still enjoyable !

What’s the Victor Cruz look like? Wonder if I have it or not

Jeff anything you don't want, feel free to add to the next Team Collectors shipment. Some of the guys collect football. Anything they don't, I will add to Barry Pace's next Medium Flat Rate I send him. Thanks as always for thinking of our group!

Ct Sox Fan said:
Jeff anything you don't want, feel free to add to the next Team Collectors shipment. Some of the guys collect football. Anything they don't, I will add to Barry Pace's next Medium Flat Rate I send him. Thanks as always for thinking of our group!

Will do Wayne. I broke the other two retail boxes of 2006 LRS and will post the hits folks when I scan them in the next few days. One box had 5 inserts the other had six. Couple decent ones. I will include all the football Wayne in the newest box of baseball and you can disseminate.

I also have a bunch more baseball that came in, but the next few weeks I'm really busy , and might only be able to break one maybe two of these boxes. I will post the pics soon as I can scan. One of the boxes I can show off today, because it's already scanned , but the other one I haven't had time to do so. This next box has a lot of card variations, and I'm going to be really careful and slow, as some of these variations are harder to find, and graded examples are not sent in regularly, so I want them in peak shape.
J

OK folks the box break this coming week is going to be one of my 2002 Leaf Rookies and Stars boxes
Box pics attached. Not going to break them until Sunday night ( took Monday off for a Doc appointment)
I'll add info about the series and some personal comments then 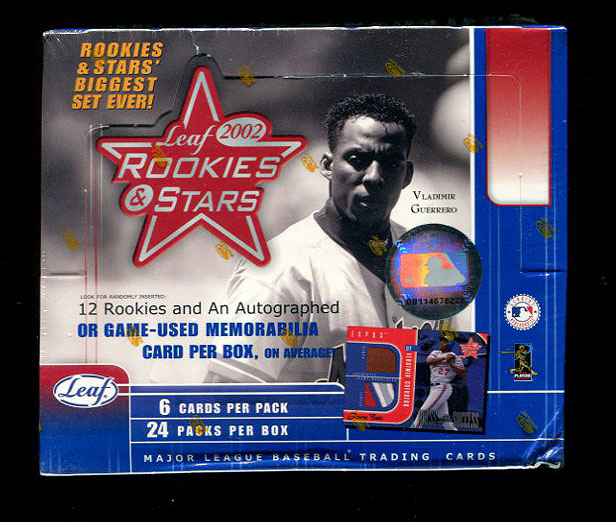 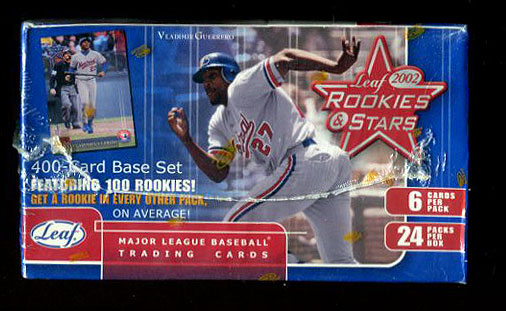 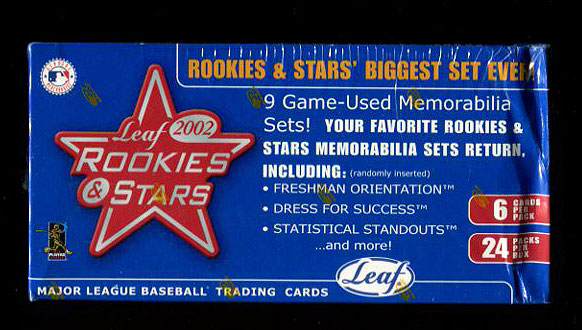 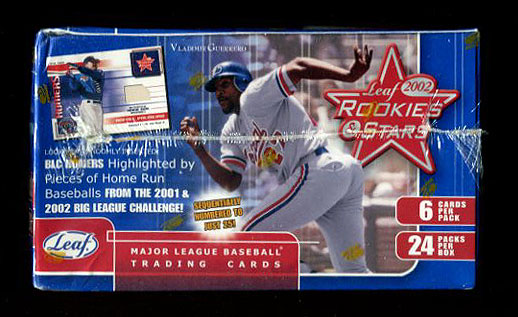 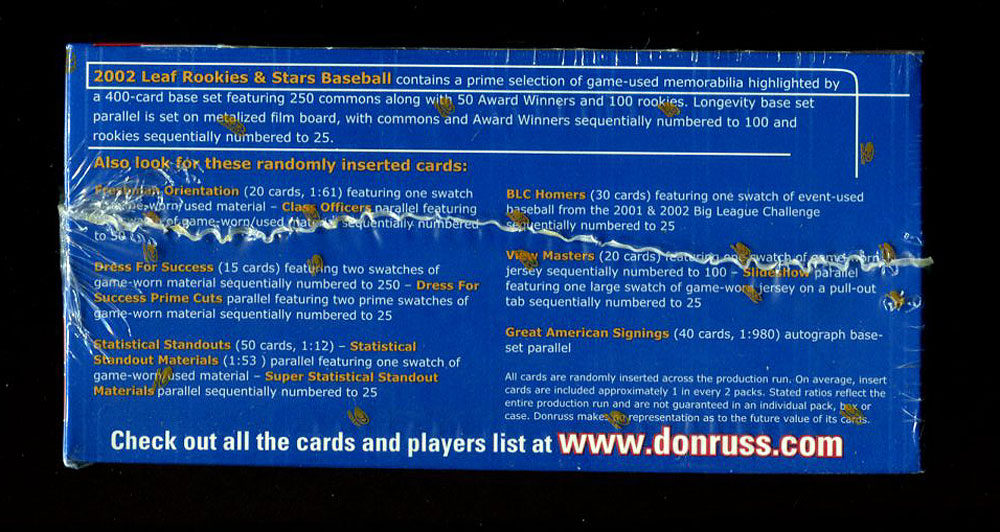 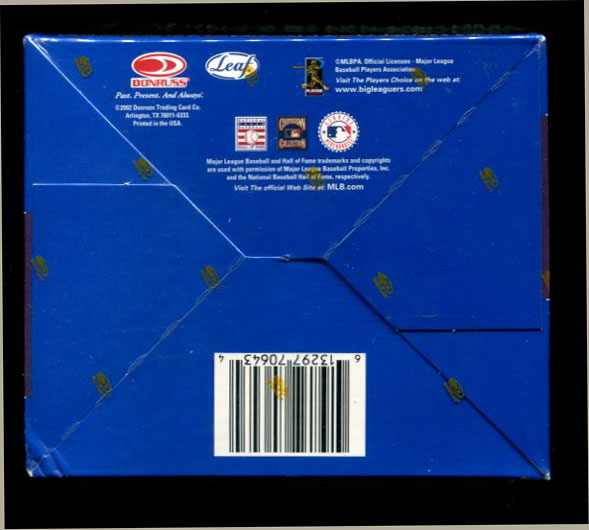 Scans of Box 2 of the 2006 LRS hobby box. Lots of nothing and more damaged cards.
No major stars and besides the Crumpler & McIntosh nothing I am keeping.
I'll be scanning the Box 3 hits before I open that 2002 box later on 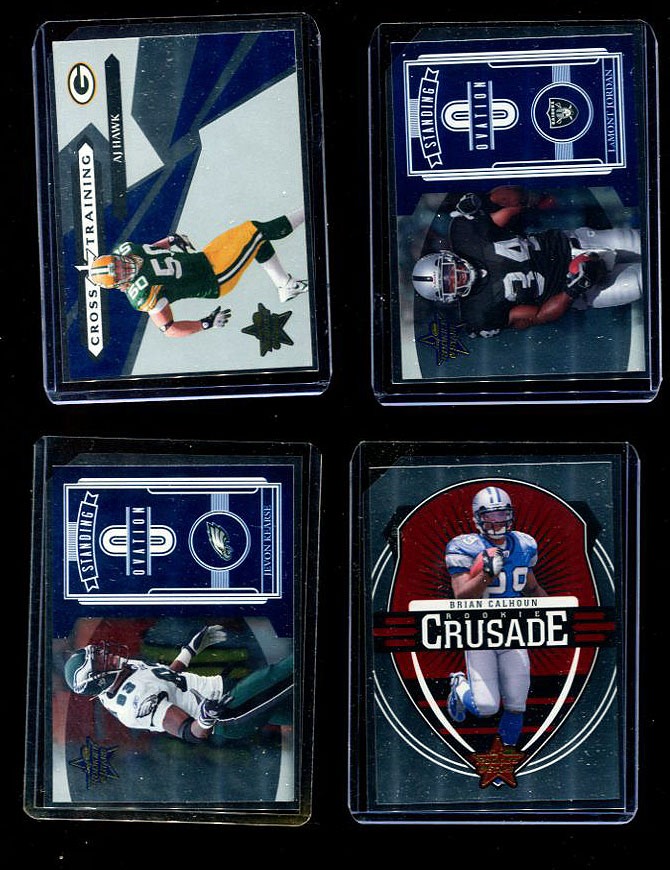 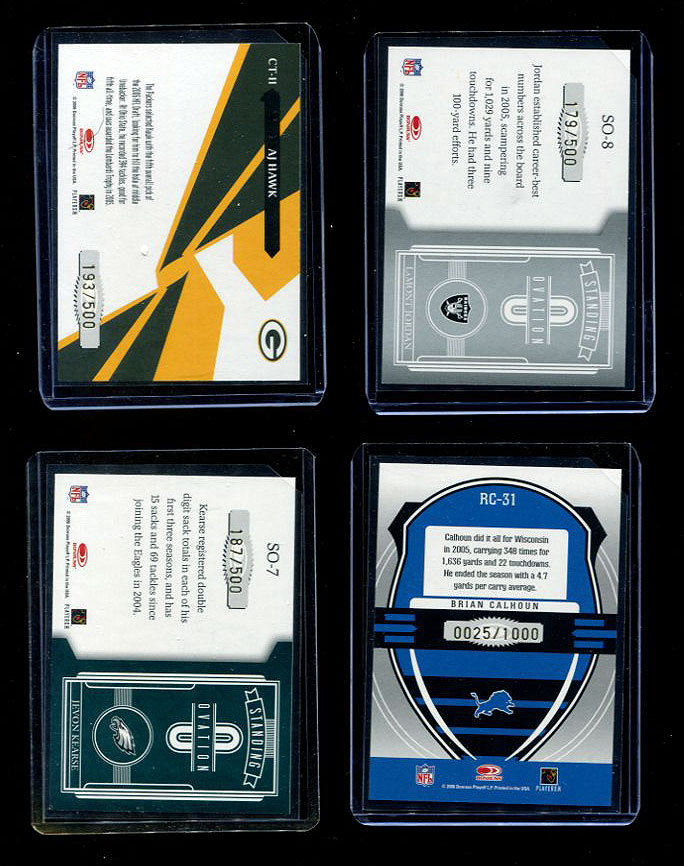 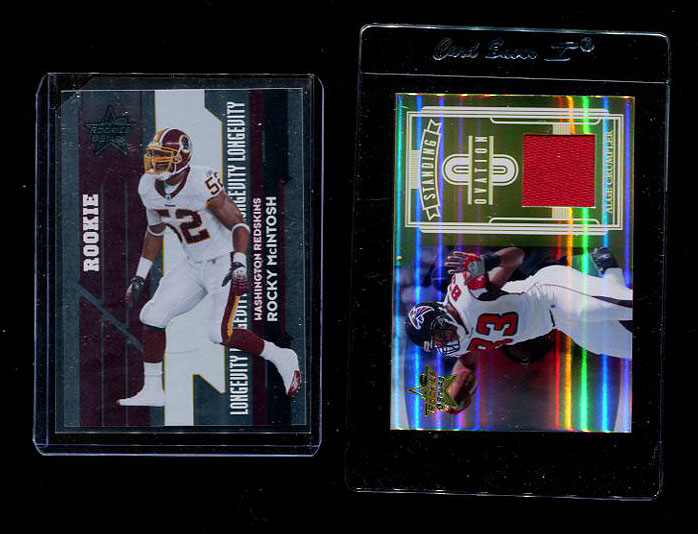 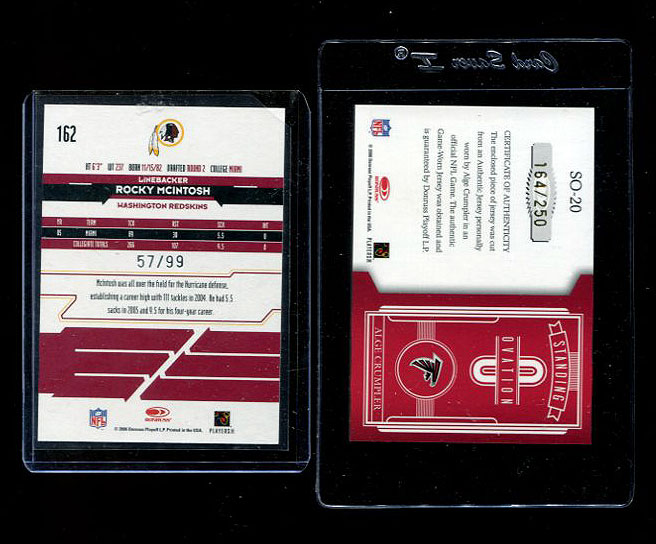 Box 3 of the base 06LRS now scanned. I initially got excited seeing the Hines Ward -until I saw the huge dimpled edge 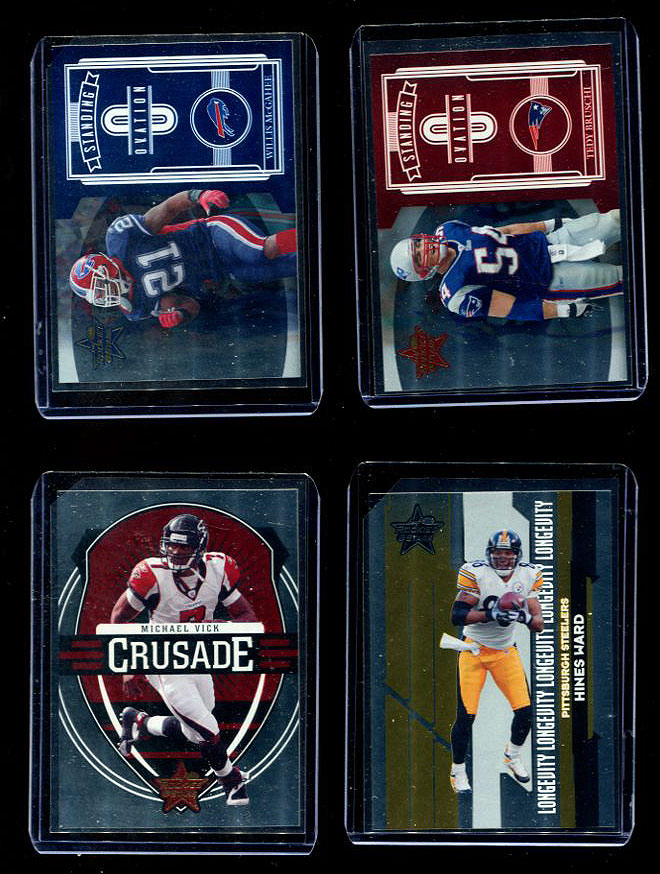 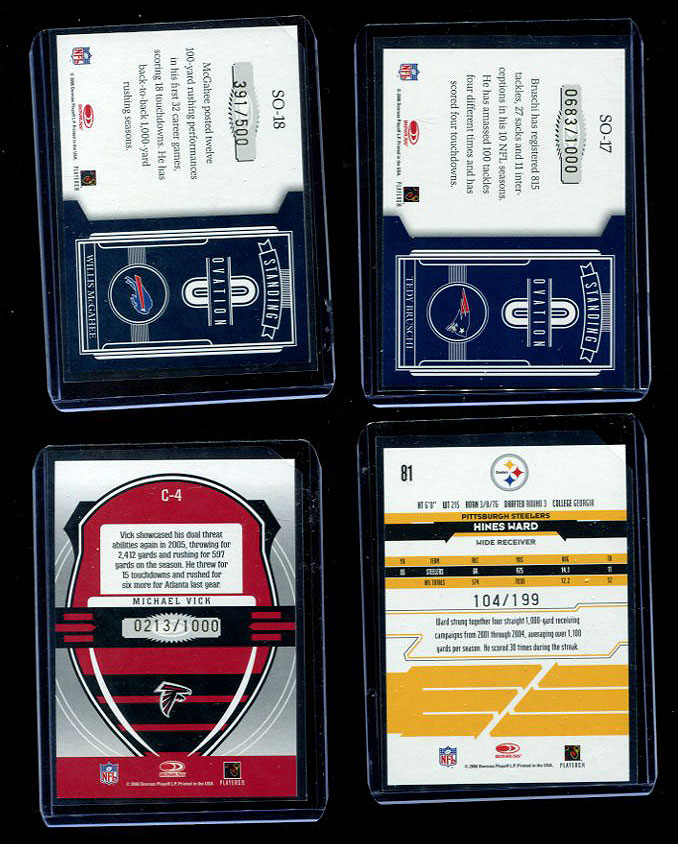 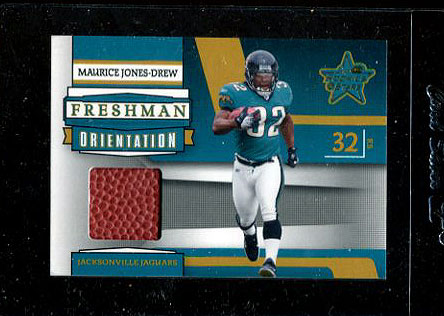 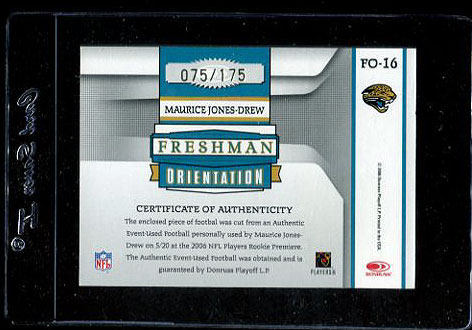