This custom 1973 Topps Chuck Goggin was created by Bob Wong. Mr. Goggin signed it TTM in 2017. 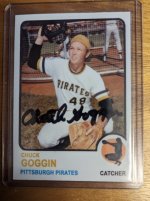 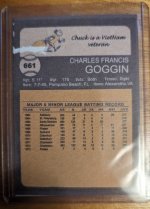 Fernando Gonzalez signed for me in 2019 via PastPros. I really like PastPros because the prices are reasonable; they have pulled some players who previously were non-signers into the market, and because there is accountability on the part of the signer. I received a PastPros auto that I thought was substandard (bad pen) and contacted PP. They sent some new pens to the player (not Gonzalez) and I was able to send another card to be signed at no additional cost. 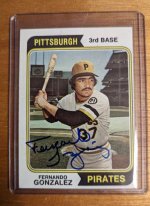 Going out of order today to show off a recent pickup from the LCS. I already have a nice Briles, but couldn't pass up the opportunity to pick up such a beautiful signature on a card that tells a story. 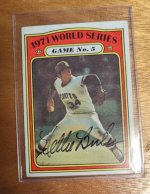 Rich Gossage played only one year with the Pirates and didn't appear as a Buc on a Topps card (just Hostess and Kellogg's), so I'm glad that Panini went unconventional with this card. 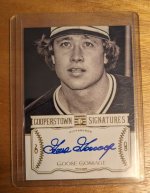 Panini is weird with Gossage, they've made several Goose A's cards. He did pitch a couple of years for them near the end of his career but who remembers him for that.

I like the oddball team cards (autographed, of course). I am still hoping maybe I stumbled across a Juan Marichal, Hoyt Wilhelm or Jim Bunning Dodger card. I like the Bucs Gossage, too bad it's unlicensed, so they hide the logos.

Mudcat Grant signed this in 2019 via TTM. He played 14 seasons in MLB, was the 1965 Sporting News Pitcher of the Year, a two-time All-Star, and stayed involved in baseball after retirement, yet never had a Topps certified auto (he did have an Upper Deck Timeless Teams, with the Twins). 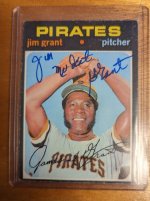 Sometimes they get missed or they don't want to participate. Still wondering why Kenley Jansen has no certified autos and he is still active! Wes Parker didn't either, to my knowledge. Heritage missed the boat with him, unless he just didn't want to do it if he was even asked.

I sent the Jerry Hairston custom on the left to him TTM in 2019, but no response. After waiting about a year I thought about trying through his sons and even picked up some of their commons to send with a Jerry Sr. card, but before I could get them out I learned that Brian Fredrich of abcunlimited.net had lined up a private signing for his custom Shoe Box Heroes cards. I preordered one and it arrived in January 2021. My guess is that dealing with Brian shook something loose at the Hairston household because my custom came back signed shortly thereafter, along with a long letter about Mr. Hairston's faith. I'm glad to have both of these. 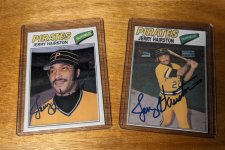 This was an eBay purchase. Hamilton does not sign TTM. 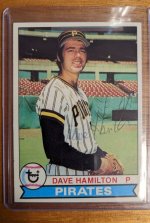 Gary Hargis played in one major league game, as a pinch-runner in 1979. He doesn't have a major league card; the Portland Beavers were the Pirates' AAA affiliate in 1979 and 1980. I got this card in a trade with a member of The Bench. 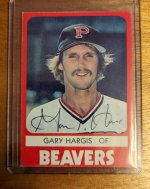 Chuck Hartenstein was a fantastic TTM signer who passed away last year. He signed the 1970 Topps card for me TTM in 1970 and included the other items. The signed picture is on glossy, heavier stock, reproduced from a McCarthy postcard. 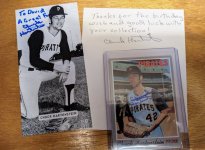 Richie Hebner is a pretty prolific signer, to this day. The Topps and SSPC were TTM in 2020. 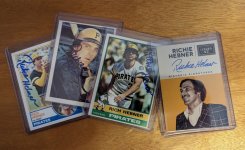 I love the Panini Golden Age. Much better to use a photo of the guy in street clothes, then to doctor the photo to remove logos. 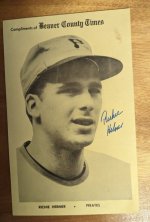 This 8.5" x 5.25" card was distributed in conjunction with an autograph event to mark the reopening of the Beaver Valley Mall in 1972. eBay pickup.

I would be curious to see who you are missing thus far through Hebner. I was going to ask if you are showing only what you have and passing on those you don't, but I don't recall seeing Clemente, which isn 't a surprise. Those with Clemente autos are either very lucky or have spent considerable funds to obtain one. Anyone else still a hole in the collection that might be easier to find?

I am missing four through Hebner. George Brunet, who lived in Mexico after his MLB career and died in 1991, has only one Pirates card and I've never seen it signed; Clemente; Tom Dettore, who has long refused to sign and whose only Pirates cards are as a minor-league pitching coach; and Terry Forster, who used to sign but no longer does, but since he never had a Pirates card there aren't any out there.

BucCollector said:
I am missing four through Hebner. George Brunet, who lived in Mexico after his MLB career and died in 1991, has only one Pirates card and I've never seen it signed; Clemente; Tom Dettore, who has long refused to sign and whose only Pirates cards are as a minor-league pitching coach; and Terry Forster, who used to sign but no longer does, but since he never had a Pirates card there aren't any out there.
Click to expand...

Brunet is brutal. I've got him on an Index Card because waiting for his only Houston card to pop up is unlikely to happen.

I'm just waiting to see what card you have for my man Dave Parker
You must log in or register to reply here.