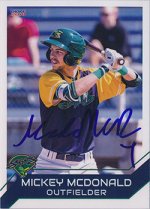 Mickey McDonald - Previously mentioned, I found this minor league team set card signed. He's back down in the minors, during his MLB time he went 0 for 4 with 3 strikeouts, but he did walk twice. 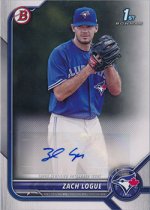 Zach Logue - Picked up in the Matt Chapman trade, he's made one start and one relief appearance so far. Topps felt highly enough about him to give him a paper auto in 2022 Bowman so hopefully they'll make an A's autograph of him at some point.

No ground gained as Adrian Martinez made his debut yesterday to pitch the second game of a doubleheader. I do have something incoming for him, at least.

Got 3 in plus one upgrade: 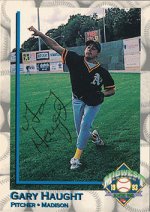 Gary Haught - Surprised this took so long to find, he only made it into 6 MLB games with the 1997 A's but he did have a long minor league career. No major league cards for him but this minor league card has a big A's logo on the jersey so that's pretty close. 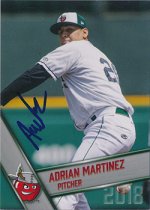 Adrian Martinez - As previously discussed, he was just called up to start the second game of a doubleheader, then immediately sent back down. 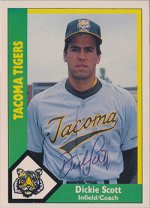 Dick Scott - I had no luck finding any Dick Scott autographs in a year of searching but I did notice he was listed as "Dickie" on some of his cards so I tried searching for DICKIE Scott and located this one. He's been a coach in the minors and majors for the past 30 years so I have no idea why there aren't more of his autos out there. 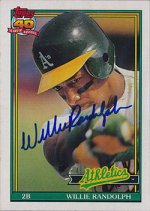 Willie Randolph - This is an upgrade from the Yankees card in my 1988 Topps set. He played a bit over a half a season with the A's in 1990 and wasn't that good. He did at least go 3 for 8 with 3 RBIs in the ALCS, though. 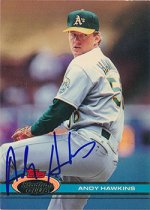 Andy Hawkins - This is an upgrade from a Padres card in my 1988 Topps set. I believe this is his only A's card. He started 14 games for Oakland in 1991 at the end of his career.

Three new A's pitchers have debuted recently: Parker Markel, Austin Pruitt, and Domingo Tapia. I already have one in below and the other two are incoming. Also picked up one very slight upgrade. 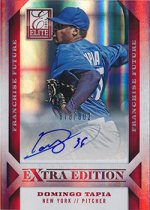 Domingo Tapia - Just called up and has already made one relief appearance. I had picked up this card when he was in AAA, figuring there was a pretty good chance... 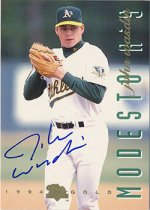 John Wasdin - This is a little upgrade over a Signature Rookies card that has an airbrushed cap. It's a Modesto A's uniform, but obviously the same thing as an MLB A's uniform and cap.

Now at 703 of 714. Waiting for the incoming Markel and Pruitt autos to drop my needs back below 10.

One pickup and one upgrade today. 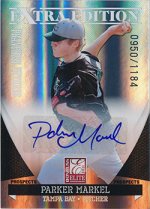 Parker Markel - He's made it into 3 games and hasn't given up any earned runs, but has managed to walk 5 batters in 3 innings. Last pitched in the majors in 2019. 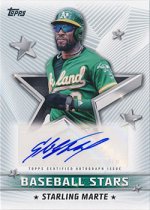 Starling Marte - This is an upgrade from a couple of different Pirates autos.

Another pickup and upgrade today. 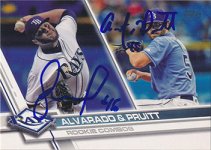 Austin Pruitt - He has made a couple of relief appearances and done pretty well so far. This card also includes a Jose Alvarado auto, so if he ever plays for the A's I'm set there. 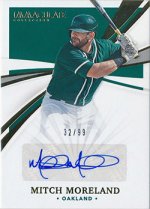 Mitch Moreland - This is an upgrade from an older Gypsy Queen Rangers autograph. Would prefer one with logos but I don't think Topps has made one.

The A's also called up longtime AAAA-type player Matt Davidson, who started last night and went 0 for 3 with 3 strikeouts! I've got one incoming for him. But they are also calling up a new pitcher to start tonight's game and I can't find anything for him, so that will set my progress back.

Pruitt. He pitched literally 2.2 innings for us. I've got his auto incoming now, but they pitched him just to see if anyone would trade for him lol
R 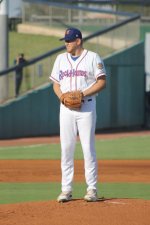 This is the guy you are looking for. Only thing from him is minors.

Yep the above pictured Jared Koenig debuted recently...I do have a 2021 minor league team set card of him but I can't locate any autographs for now. 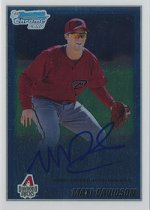 Matt Davidson - 31 year old called up because the guy that was playing third base (Kevin Smith) really needed to go back to the minors to learn how to hit some more. Batting .176 in 17 at bats, with 8 strikeouts. Yeah he's a genuine 2022 Oakland Athletic.

So one pickup and one miss brings me to 706/716. I've got one more incoming and the A's just called up another guy (Jonah Bride) with no autographs out there so it looks like my needs will remain at 10 in the near future.
R

Now you need Bright Lights. From my PC 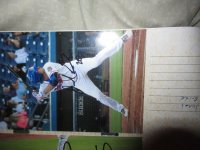 Yes, Jonah Bride, shown above, made his debut recently and there's no autos out there for me to buy. But I did pick up one to keep my total needs at 10 players: 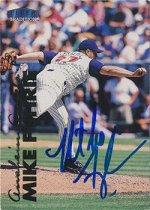 Mike Fyhrie - Pitched 19 games for the A's 2001-2002. I was holding out for an auto on an A's card but I finally threw in the towel and bought this one. I actually sent to him TTM last year but he stopped signing.