Finally sucked it up and bought one: 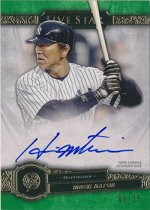 Hideki Matsui - Spent one season with the A's, 2011. The only A's cards he got were in the Topps Attax set so I assume Topps didn't have a regular card deal with him that year but they had a different deal for "game" cards like Attax that they could include him in. He wasn't good that year but it was fun to have a legit star on a bad team.

tntnorthnj - Anyone a fan? I am NOT!