I was putting away some recent pick ups and although have thought about this quite a bid from a bidding/buyer perspective, I have never really put it to actual words.

I acknowledge that I have a favorite team bias! I collect Dodgers and as I consider cards or autographs, I will hold certain Dodger players in higher regard than their actual playing status should warrant. I do the same for Mariners in the 70s/80s too. Aside from a player being scarce, where lots of people may be chasing a signature or perhaps a set where a signature may be tougher to find, I see cards of such epic proportion like Ed Vande Berg, Steve Shirley, Nate Oliver, Johnny Podres and others in much higher regard than I do players of other teams.

The prices should tell me that I am in the minority, but I will often sweat a new card that is listed, if I think it is something "golden". What really got me thinking about this was a Don Newcombe autographed team photo. Now Newcombe has a few solid things going for him in the autograph market to drive some value. like the fact that his is no deceased, he played for the fan favorite Brooklyn Dodgers and oh yeah, he was a 4x AS and won a ROY, MVP and a Cy Young award. That is a pretty solid resume. However, when you dig deeper, you see that he really only had 5 solid years. He was a 3 time 20 game winner, but then again he was playing for a power house too. His career stats put him in company with the likes of household names Schoolboy Rowe, Jared Weaver, Dennis Leonard & Cliff Lee. Clearly that is not a group of players that you think of when you think of all-time greats, but for the reason I stated in this thread, I hold Newcombe in mu higher regard only because he played for the Dodgers!

I'm guessing you team autograph collectors like @dano7 , @MrMet , @Therion , @Dilferules and anyone else I may have forgotten probably suffer from the same bias? A Tim Harkness, Manuel Barrios, Andy Carey or Olmedo Saenz autograph may be held in a little higher regard than their career would dictate it should? You might even have caught what I did there....all 4, one from each of your teams, was also a brief Dodger and I hold that very bias for those players too!

Feel free to share those players that very few others would have the slightest care for that you go crazy for if you win one of their signature items.

Manuel Barrios was, for years, one of the unobtainable autographs in my Astros collection. Someone hunted him down and was able to get my custom signed. There was a point where I would have paid more for this than I would a Greg Maddux autograph and I think it is clear to pretty much everyone that Maddux is worth significantly more than Barrios. 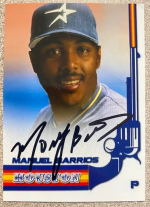 While I am not a team collector to the level a lot of you fellas are, I understand this completely. Not a player, but announcer Joe Castiglione had a Topps auto a few years ago, I didn't see one sell for less than $50 and at the time I thought people were crazy, I haven't seen one in months and now wish I had paid up.
I also experience this with an attachment to role players on the 04-07 championship teams those teams, 2004 specifically are so special to the fan base it's hard for those fun guys to not be held on a higher pedestal than they should be. 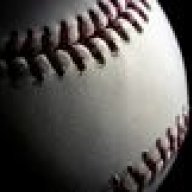 Also not a team collector, but I can completely relate to a similar "bias".

For about 10 years, I was an avid (and I mean avid) collector of southpaw pitchers 1900-present.

The highest profile lefties of all time were nearly all obtainable for a price, but my most cherished ones were the guys who just did not seem to have many autographs out there period. Either that, or I was just looking in the wrong place the entire time.

Granted, most were pre-WWII, but when I found one, I was ecstatic. We're talking Jesse Tannehill, Art Nehf, Noodles Hahn, Hippo Vaughn, etc...). Lefty Grove, Warren Spahn, and Carl Hubbell all took a back seat.

For the modern guys, I was determined to find signed 8x10s only (no substitutes). Well, there was a time when it was just about impossible to find guys like Larry Gura, Chris Short, Dave McNally, Dick Ellsworth, etc... They were fairly common on a 3x5 or trading card, but on an 8x10? Forget it.

When I finally landed them, well you'd think I just picked up a Rube Waddell or Eddie Plank. Having McNally in particular was almost more joyous than Koufax....almost. 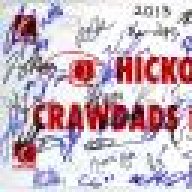 Advantage of having minor league team in town and in group where we furnish road bags / snacks for them .I can get most autos even some away teams .Always a few that DON'T sign .Many autos are unreadable . Here's something to do ---get picture with G/F's or wife .

Yeah for sure I have that bias - I think everybody does with the stuff they collect, unless what they "collect" is actually just an investment they have no emotional attachment to. And I do tend to only care about what a player has done for my team...for example I'm not willing to pay way more for a Tim Hudson autograph than a Mark Mulder autograph, even though Hudson had a far better career. They were both on the A's at the same time and were both good...the fact that Hudson continued being good for a long time afterwards doesn't highly impact my desire for his cards. Not coincidentally, my Mark Mulder and Barry Zito collections are much nicer than my Tim Hudson collection.

bstanwood said:
While I am not a team collector to the level a lot of you fellas are, I understand this completely. Not a player, but announcer Joe Castiglione had a Topps auto a few years ago, I didn't see one sell for less than $50 and at the time I thought people were crazy, I haven't seen one in months and now wish I had paid up.
I also experience this with an attachment to role players on the 04-07 championship teams those teams, 2004 specifically are so special to the fan base it's hard for those fun guys to not be held on a higher pedestal than they should be.
Click to expand...

They must have sold for less, because that was the first year I dove into Archives and tried to complete the 4 color run for everyone. I recall this one being a bit more than most and I was hesitant to pay, but I did end up with the 3 versions (base, blue, red) he had and I am sure the red (/25) probably cost me the most, but I am thinking probably not $50. He did not have a peach that I am aware of. He probably also had a gold 1/1, but I was not buying those unless they were cheap. I was one of those crazies though, because I had no idea who he was and was only buying to complete the run. I'm sorry.
B