No autos today, but I do have a biggie coming, hopefully soon and w/o the stress of delays and potential lost package!

I did get this Gil Hodges lot. I really wanted the larger photo (approx 5x7) and don't know anything about it, but have not seen it before, so why not. it's probably nothing special, but you never know. It has the look of a promotional item, but no brands/sponsors or any identifiers. The smaller one is kind of a postcard type item. There is something on the back, I forgot now what, maybe a photography name and address. 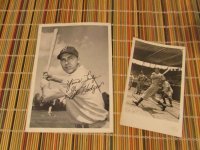 Today was a very big day. I'll start it mildly, with an Andy Carey PC. He has a 62T Dodger card, but he is hatless if i recall. 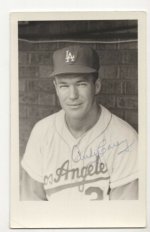 You may recall I am a big fan of the Pepsi clubs that were popular in the 70s. I drank Pepsi briefly, but am a Coke man when I do have soda these days. I have no special love for pepsi in itself, but this Japanese Menko card with the Pepsi logo just caught my eye. Of course Davis was a long time Dodger. He was a member of the 1977 Chunichi Dragons, so this card is likely 1977 or 1978. The Pepsi logo and gold signature (can't tell from scan very will) really make this card an eye catcher, not to mention the orange background and colorful uniform he is wearing. The disc is around the size of the mid 70s MSA discs, maybe slightly smaller. I have a small Davis collection, although he doesn't seem to have a ton of really oddball stuff. Someday, I should focus and see how close I am to getting everything. He was in some tough Topps test issues, which has been a deterrent in the past, such as the 1968 Topps 3-D! 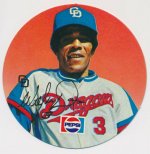 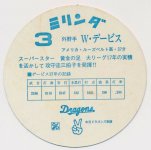 I am not going to end with a Garvey /7, so you know something good is coming. I really do like the Flawless brand, except for those lack of logos. This is on-card signed and I think he takes his time with this type of card, because lately his cheaper issues look rushed and sloppy. 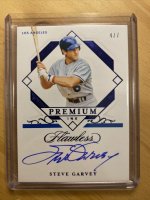 The finale! I really wish I could have snagged one of the Topps cards with the 86 design, but the only one I have seen is /5 and a 1/1! When it comes down to nothing or Panini, I will take Panini with a little bit of an attitude. At least it's very blue! He's not in yet, but a sure lock 1st ballot guy. This will continue my collection of certified LA Dodger HOFers. I am still lacking Jim Bunning and Hoyt Wilhelm & Juan Marichal. Probably never see any of those, unless by some miracle, I get one of those buyback cards (except Bunning & Marichal don't even have a Dodger cards aside from the 1990 Target set).

Albert Pujols /25. This was a splurge. I had his auto already, but really felt I needed a Dodger card. Hope he comes back and plays another season in LA. 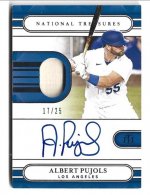