The recently deceased Bill Sudakis on a cool card that I believe was his last. Tough to see the signature, but it's there. View attachment 315467

Willard Hunter dual signed 3x5, as he apparently always seemed to do on requests. View attachment 315468

Then to top it off, a Garvey poster I have never seen before. It was not cheap, which makes my cheapskate self cringe a bit, but figured I am buying less these days, so it's OK to overpay for something really unique. View attachment 315470
Click to expand...

This interesting little booklet is the only item for today. From what I can see, Historic Autographs is essentially a repackaging company. They seem to take aftermarket items and make new collectibles out of them. Essentially a custom card maker if you want to look at it that way.

It took a relatively inexpensive 1949 Bowman Rex Barney and paired it with an even less expensive cut autograph from Barney. The booklet itself was not overly expensive, I won it for $18.50 before shipping, which was nearly my top end limit. i'm guessing I could probably snag the card and a 3x5 for around the same price, if not less. The cheapest 49B Barney I see on ebay now is $8, with another just $10 that looked a little cleaner. There are no cheap Barney cuts right now, but a photo selling for $6 OBO. I have landed cut/3x5 Barney autos for as cheap as $2-3 before though. So, there you go, aside from the fancy booklet, you could replicate the "meat" of this item for under $20 (including s/h) right now if you wanted to. 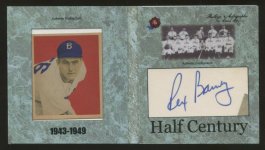 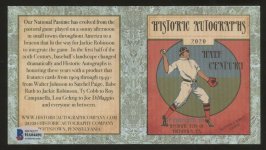 One ebay seller is trying to get $60 and claims it is one of 4 copies. The card I have is not marked or numbered in any way. Turns out, after doing some research on their website, HA has a checklist that indicates there are 10 copies of this card (there are 4 '48 Bowman Barney versions, so the seller misread the checklist or was confused). Although not numbered as such, 10 is still a small number of copies, so if that means anything to you, this is a pretty decent find for under $20! 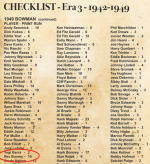 The checklist is pretty loaded, but this is the first time I have stumbled across one of these. Guessing this was a pricy offering, given what you had the chance to pull.

3 from the boxed set that set folks back $100 from Topps. I like the design, but figured the set was worth maybe $35, so the autos were $65. Not worth it. I got each of these for much less than the price of 1 new from a set, but my chances of pulling a Koufax was 0% too. Would love to piece together a near set someday and will try if/when they pop up at a reasonable price. 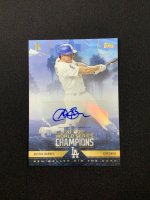 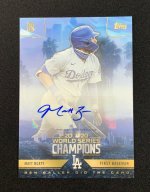 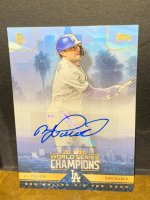 This McKinstry was a buck! Shipping was almost 5X that!! One of the reasons I am approaching the end of online buying... 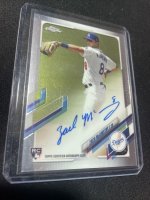 The last item is not an auto and barely checks a box for a regular card (Panini), but I wanted something to remember Albert with. I know there is about a fraction of 1% chance that I'll land a certified Dodger auto of him, unless the stars magically align. The first (and only) one I saw go up for sale was from Topps, using the 86T design and was numbered to 5! It sold in the $400s. I'be be willing to pay a bit for one that was decent looking, but not $400+. Anyway, snagged this bat card pretty cheap, thankfully, because it's a sad excuse for a Dodger cards anyway. If I recall, it is /25. I don't care actually. 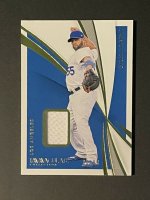 Today brought a Crime Dog & another Lonestar card. I have been trying to win one of these for a while and was finally successful at my price range. Sometimes this backfires, but a fair amount of the time if I am patient enough, I finally get to pay my price. I'd like to see this man in the Hall of Fame someday. 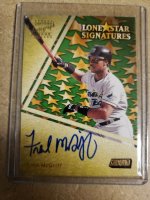 Usually I start with true Dodgers, but frankly, I am not feeling this years Archive/Fan Favorites set. Usually, one of my favorites of the season. This year it is pretty lame. I don't know why they keep using 1982? Of the main designs used this year, 75 would be my favorite and nobody I care about \has that year. That is one of the worst set designs of the 80s! There are only 3 Dodgers in the basic auto set and none of them are overly exciting, although apparently now EVERYONE is a fan of Carl Erskine! I can't even win his basic auto card to save my life. i know the guy is ancient and one of the handful of remaining living Brooklyn players, but c'mon...WTF?! The weirdness continues.

Anyway, I am not going to show them all and I have not received the purple yet, but I have won and received the silver and base Paul LoDuca autos. I don't think I have seen but one Dodger gold auto 1/1 card from this series (Lasorda-Did not win it) in the 5 years I have been watching these. Maybe this is the year? Still need his blue /25 as well. I have won a few singles here and there (Willis blue, Griffey silver, Franco base, J. Carter base, Podsednik base & blue), but far from the first year I bought these where I was completing the 4 card run of everyone in the basic set. 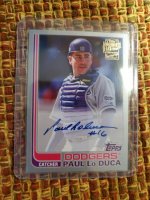 The purple LoDuca showed up today as well as this great looking card. Not as cool as his 74T, but a nice runner up. 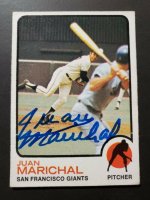