I do love the prospect/rookie cards that are Dodgers and signed, but it is also cool to note that each card features a future Dodger as well. Buckner's partner on the card, Enzo Hernandez, would join the team in 1978 as a free agent and end his career by seasons end.

Paciorek's card mate, Dusty Baker, would go on to a much longer career as a player (19 years), joining the Dodgers in 1976 in a trade with the Braves. Coincidentally, Paciorek was one of the Dodgers sent to the Braves in that deal. Baker would then continue as a manager with great success, logging in 22 seasons as skipper of various MLB teams through 2017.

Finally got the Ferrara Red after getting jerked around by one seller. Just need the Tommy Dean red now and I will be content for 2020 Heritage real one autos (Although WHEN they drop, I will try to add the Lux and Buehler cards.

I guess 10 images is the limit now, so the former/future guys have to be alone in their own post. 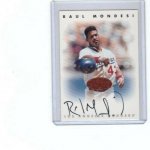 I have not normally gone after minor league issues too aggressively, mainly because a lot of times they never actually make the big club. I will pick them up when they are in larger lots though or if I am afraid if I don't act now, I'll miss the boat. In this case, it was neither, but rather I just liked the card design and wanted one. Gavin Lux is too pricy, so I went with this instead.

I really like the look of these, reminds me a bit of 65T design. Taking a cheap gamble that he not only makes the Dodgers some day, but does OK.

A trio of JD Drew Autos

That Strawberry is nice!

No actual Dodger image/items here today, just former/future autos. Kind of thinking I may switch to just showing Dodger items and 3x5/cuts/documents only, instead of opposing team items. Any thoughts one way or another from anyone? I enjoy sharing either way...

First item is a Heritage Player Sample. Although not certified by Topps, it appears and is my understanding that they gave out a number of copies of these cards, marked "Player Sample" as part of the signing process. Players were then able to use these cards as they wished. Actually a pretty damn cool idea by Topps. I recently asked a player who signed some cards for the 2020 Heritage edition if they still gave out these blank cards to the players, via facebook, but either he missed the question or was not willing to answer publicly. I don't know if they still offer these player samples or not. This is the 2nd or 3rd copy of one I have added to my collection.

2nd item is a Cleveland Indians Team Issues postcard. Features Dodgers short timer Dennis Lewallyn. I say short timer, but he was actually with the club for 9 years but only managed 23 games across 5 MLB seasons for the Dodgers, 1975-1979. A short stint in Texas (4 games - 1980) and another 11 games with Cleveland across 2 seasons, 1980-81, and his career was over. He was 4-4 lifetime. He had a bunch of minor league cards, but his first major card was his only, a 1982 Topps. A few oddball Cleveland issues and his 1990 Target card may be his only real Dodgers trading card.

Last item is pretty cool. It's an old contract that is signed by Horace Stoneham, one time Giants owner and GM of the Tacoma Giants, Rosy Ryan. The content is neat too, as the contract is for Tom Haller, who would eventually join the Dodgers later on himself.

An Upgrade to the Elite card from last year. I don't always bother, but liked the look of this design enough and it seems to be one of his only, if only, licensed autos for the time being.

Brad Gulden, a hitless member of the 1978 Dodgers for 3 games at the beginning of his career.

Jim Gentile. I just featured the Heritage player sample card yesterday or the day before. This is the real deal 66 Topps. I believe it is his last regular issue card as an active player. Gentile is also one of the last dozen or so living former Brooklyn Dodgers. He appeared in 4 games for the Brooklyn team in 1957 and moved to LA with the team and got into another 14 games the following year. 1959 was spent in the minors before the Dodgers traded him away to the Orioles for $50K cash and a player to be named later. That was not a good trade for the Dodgers, as Gentile proceeded to have 3 solid All Star campaigns and the player the Dodgers got, Willy Miranda, was done and never played for the team (or in the majors again).

Ken McMullen. He had 2 stints with the Dodgers, 1962-94 and again 1973-75. In both cases, that was before or after his prime career years. However, McMullen will forever be known by Dodgers fans as having one of the most expensive regular Topps rookie cards possible. Sadly for us, if you don't have one already, he shares his rookie card space with Pete Rose!

Finally, Geoff Zahn. He started his career in LA and played 3 seasons (73-75) before being traded with Eddie Solomon to the Cubs for Burt Hooton. Although Zahn was only a hair better than .500 for his career, he did win 111 games, but the Dodgers made out better this time with the trade. Hooton had a solid 10 year career with the Dodgers.

Therion said:
I also have the original Gentile, the Player Issue Heritage auto, and the Heritage auto of Gentile. It is his Astros trifecta.
Click to expand...

How about the Red Ink Heritage? I assume there is one. I don't think I have it. I'd have to check to be sure though.

You just had to ruin my fun! You are right, there must be a red ink version that I still need.

Therion said:
You just had to ruin my fun! You are right, there must be a red ink version that I still need.
Click to expand...

Look at it as helping you complete the quadfecta.

Max Muncy /50. Love the retro design with the gold border. Not a fan of the all gold "bordered" 99 Topps set, but when they do these types where it is just a true rectangular border, I love the look. 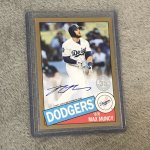 I love seeing EVERYTHING you get! I personally do not count players on a card for another team for my Yankee collection. But that's the neat thing about collecting, as you can streamline it to your own tastes!!!!

I have another thread where I share that one of my incoming Dodger autos got pilfered. This Tom Paciorek will not be joining my collection as was originally planned! If you happen to see it for sale or trade somewhere, please let me know.

Instead though, I will now focus on what I did get today. I have not added a new Reese in Quite a while. Reese died right as ebay was ramping up and his signature used to be pretty cheap. Compared to other HOFers who died around the same time, he is still a reasonable range. I like this card and the signature was clean.

The other one is a Future/Former certified card.

Nick Green logged in a whole 5 games for the 2010 Dodgers between stops in Boston and Toronto and does not have a Dodger auto card to my knowledge, nor should he realistically have one. According to baseball reference, he played 3 games at 2B, one at SS which means he must have been a pinch hitter or some other offensive sub, as the 5th game is not identified by position. From the plate, he was a disappointing 1 for 8 with a single and 1 RBI.

He played for 8 teams over 8 seasons, with a new team nearly every single season. Journeyman succinctly defined. Happily, yet oddly, guys like this seem to all have multiple pack issued certified autographs due to the explosion of signatures being inserted into products in the late 90s to present. I for one am happy to be able to find certified signed cards of guys like this, but feel bad for people buying packs only to have had this be their "hit"!