Ok AC/DC Junkies, this one's for you!

So after months of speculation and a ton of social media chatter in just the last few days, AC/DC has been throwing out hints on Twitter and YouTube including turning the lightning bolt back on and showing the original lineup yesterday. Malcolm Young has been replaced by his nephew Stevie Young.
---(RIP Malcolm...1953-2017)
Presumably the rumor is there's a new album coming out called PWR/UP possibly in November. Here's yesterday's post: 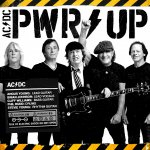 I've always been an AC/DC junkie so I'm looking forward to their new release. --I'd also LOVE to go see them in concert one last time but there's no rumor of a tour obviously. GO AWAY COVID!!!

This is the teaser they posted this morning:

AC/DC, we junkies salute you!