Do you think that sports card sales will stay strong or do you think a fall is coming?

mrmopar said:
I see some softening on newer stuff, especially as more copies continue to "flood" the market. Case in point, although I have yet to nab one yet. 2021 Heritage Garvey auto. The base is a $20-25 card in my opinion. This is based solely on my experience with Garvey autos. I know that Heritage is a very popular set, but the card does not appear to be that hard to find, yet copies first hitting the market were topping $100. I see this with all of the new Garvey stuff. all of the sudden after YEARS of very little competition for most everything that hits the market, people are throwing money at Garvey cards. It doesn't always stand out, because we are not talking Trout or Jordan totals, but it is seriously higher than it should be.

Now I am seeing a lot of Heritage autos ending up in the $50 range. I had been offering $45 plus s/h to a variety of people selling with BO, but nobody has taken it and several have countered. Now that they have seemingly cooled, my $45 offer is no longer of interest to me. I am thinking maybe $30-35, but I bet if I wait long enough, I can nab a copy at $20. It just may be in 2022.

Now the red ink version is 72 copies. I have said this several times already, 72 might as well be 10,000 in todays market. That is not "limited". It is, but it isn't, anyone collecting for many years will understand. We have reset our expectations since 1991 nd the 10K Elites, which coincidentally are still outperforming most nevwer cards with print runs of 100 or less. Explain that goofy one. i have yet to see a red sell for under $100. To me, that is just stupid. Again, any other year and a Garvey auto /75 should settle into the $15-20 range. Give it a little boost, being a collectible set and red inks are well collected. The Clubhouse relic/Au is /25. That should be a $40 max auto. Most are listed at $200+.

I think all of this will self correct sooner than later and leave a bunch of people crying about their buys. My favorite example is the Zach McKinstry scenario. When I was first trying to get him, as he is one of 3 I still need for the Dodger roster collection, I was missing out at somewhere between $10-35 (for the red /25). Now base cards are selling for $100+ and reds have sold for as high as $300! I thought the Panini issue would water that down and I was again missing them in the $12-15 range, before those spiked to over $100 each too! Scratching my head, wondering how there are actually that many clueless people out there buying these up. I hope for everyone's sake that I am wrong (except me), but mark my words, these will fall in price fiercely.

Last thought. I watched the Jackie Robinson Leaf RC slowly and steadily rise into the 5 figure range and then in the last couple months start to skyrocket. I just happen to check when PWCC was selling (2) PSA 4 copies and one went for $35K and the other around $28K. This was a sharp increase from the last sale a month earlier that were in the high teens. As I was telling non-collecting neighbors about this crazy climb, I decided to look for any more recent sales of the same PSA 4 Robinson and was surprised/disappointed/or whatever else comes to mind that they had DROPPED, the last couple selling in the low - mid $20K range! If any card deserved it's meteoric rise, I felt it was this one. Of course, it seems PWCC is the only seller selling copies of this card and they had a bunch. I am not in the market to sell mine quite yet but it was fun to say I had a $35K card if for only a bit.
Click to expand...

these can be a bit tricky, though - eye appeal is everything when it comes to vintage. that's why you can have a 33 goudey psa 2 ruth selling for 10k and another selling for 40k.
Last edited: Apr 27, 2021

PeteD said:
pretty sure there's an awesome Bo Jackson insert (not the b&w duh)...you guys like me who've been around and sorted endless boxes know what i'm talking aboot.
Click to expand... 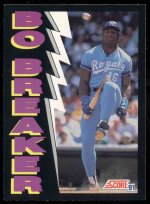 What is different in this market as with other tangible goods markets is that investors can only make $ when prices go up....at least I am not aware of how you can "short" baseball cards or even NFTs. That would make the market truly fluid - let's hope it doesn't get to that. I don't believe other markets can do that - art, coins, stamps, other collectibles. So demand is truly driving price increase and unless demand drops (shift away from cards from investors/collectors) prices should stay reasonably high or even go higher.