That's cool! I know i read that before, but most likely forgot.

K34PuckettAddict said:
...It's funny to think that my Puckett collection was initially stored in a winter jacket pocket. By the time I was in high school I had to upsize the way my cards were stored several times. I ended up building a large wooden storage box out of Cherry with individual Poplar boxes inside. I was able to house my collection in that box for several years before outgrowing it as well.

Here's some pics of that box I built in high school. I still use it for supplies for my ever growing collection and the bulk of my Puckett doubles...
Click to expand...

That's a really nice card box. How long did that take you?
K

Juan Gris said:
That's a really nice card box. How long did that take you?
Click to expand...

Thank you! I made that box my senior year and was only able to make two things that year. Since I built it in wood shop, it took me at least a quarter to half the school year to finish.
Last edited: Feb 26, 2017

Couple of things to share. First is a card I picked up in a trade with [MENTION=3401]K34PuckettAddict[/MENTION]. Thanks again Jeremy!
2016 Pantheon Gallant Gloves Gold 16/25

These next two are a couple of random oddballs I have. 1984 Visalia Oaks minor league game tickets.

While Kirby was never the focus of my collection, I have a decent collection of cards, autos and oddballs of Puck. Many in my Photobucket, but I'll scan some more this week. I'll start things with this one. One of my favorites.

Picked these up in the last year. My only game used Puckett stuff that isn't cut up into a card.

This was his Batting Practice bat. Its huge!

This was in my mail when I got back from vacation yesterday too.

Nice stuff in here guys, he definitely has a nice pack of dedicated collectors.

I've always been fond of this variation:

Nice stuff guys. I really like that card that is missing the autograph. Stuff like that never shows up anymore.
For those that are collecting new releases, it looks like Puckett will be included in 2017 donruss next week.

For $9.75 delivered on an eBay BIN this 2005 Tools of the Trade /100 seemed worth it. I always like a card with something game used that isn't only bat or jersey.

This card was really annoying me because it was probably the least valuable Beckett checklisted card on my need list.

Since I got back into collecting in summer 2015, I hadn't located a cheap, ungraded 1996 Stadium Club Members Only on eBay or COMC, and it was just really, really annoying. Finally found a cheapo on Beckett.

This photo still begs the question, "why is he throwing a knuckleball?" I think it's the only Puckett knuckleball photo on a card.

I'm a fan of the R&N China porcelain cards for reasons I cannot explain. I now have five of Puckett. I think there are five more I need, but all of the many versions of the 1985 Topps confuse me.

I often wonder why R&N China changed the colors of the backs on so many of these from what the original card colors were.

Matthew, I love that Tools of The Trade card, that's probably my favorite set ever made. I just loved the assortment of game used material that was used in that release. I'm a fan of those porcelain cards as well, but only have two in my personal collection. I need to be a little more aggressive with my searches for them though.

I remember seeing 1996 Leaf Signature Extended Autographs listed in Beckett when they came out back in the day. I was devastated when I saw Puckett was in the set because at that time, I didn't think I'd ever be able to find one. Fortunately, eBay came along and allowed me to find them. Little did I know at the time that it would be the Select Certified Mirror Gold that would go unfound... Anyway, here's the Leaf Signatures in my collection:

I like those R&N Porcelain cards too. For the stated print runs, they sure don't come up for sale that often. I think I only have a 1985 Topps currently.

Thank you! I don't believe there was a black century marks Auto or at least I haven't seen one mentioned on any want lists or heard of anyone having one. He probably started with the black sharpie and may of had to switch towards the end of the run. I'm not sure though.

Good stuff in here. I love the Clark RN stuff I can find. The 1996 Leaf Sigs are a Classic set IMO and are hard to top.

Onions said:
I like those R&N Porcelain cards too. For the stated print runs, they sure don't come up for sale that often. I think I only have a 1985 Topps currently.

Those 96 Leafs are fantastic. Love the simple design. Beautiful cards! Did they issue Black Ink Century Marks autos as well?
Click to expand...

Checked another 2004 Leaf Certified Cuts Cut Signature off my list. I'm down to only needing the Blue Signature and Green Signature w/o game used material.

I'm missing the Blue Signature. (I believe this is numbered to 10)

Please let me know if you have a Blue Signature or Green Signature available for sale. I'd love to complete this run...

Those Leaf certified autos are absolutely amazing and beautiful. My only Puckett auto was an 2005 ud hof jersey/auto. Unfortunately it was taken with all my other cards.. anyways, is this card a known error/misprint card in the Puckett community. I just pulled it from my old 1991 stadium club dome set. It says on the gold foil on the bottom "1991 N.L. ALL-STAR. 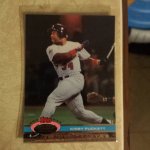