I didn't see a September thread yet.

I have a long term project (as in, since 2005) to complete an autographed 1988 Topps set, since it was the first set I collected as a kid. These three put me over 90%! It's down to the tougher signers, big stars, dead guys, and cards that nobody would choose to get signed because they're dark (see Pagliarulo) now. The Rijo puts me one away from the A's team set, still missing Tony Bernazard.

Decided to go for the 2020 Finest Flashbacks Refractors A's team set since I already have the 1993 Refractor team set plus the 2013 Finest '93 Refractor insert team set (which is just 2 cards but they are /25) so I might as well keep the theme going. This was my first in hand and they are beautiful...I have two more incoming and 3 remaining to pick up.

I collect Alex Cole for who knows what reason and the above team-issued card is a variation to add to the one I already had, which has a McDonald's logo in place of the Indians logo. Then a couple more '88 Topps autos, the team cards can be tough...I only care about getting the autograph of one person pictured, I don't need everybody. The Giants one in addition to the obvious Will Clark has Mike LaCoss, who I don't think is even on that card. The Brewers card has coach Tony Muser's signature, because I've already got a Glenn Braggs in the set so why not?

Haven't had anything come in yet except some 120pt mini snaps I ordered with that $25 coupon on Ebay.
should have something in the next day or two

After not getting anything on Saturday (except something that was out for delivery but was never delivered and is now "awaiting delivery scan", so that's great), I got a bunch today:

Cards 2 and 3 for my 2020 Finest Flashbacks Refractor team set, still need Semien, Chapman, and Puk (not counting the Sean Murphy auto because there were no autographs in the 1993 set!), plus some Luzardo stuff.

Gotta love when the parallel looks practically the same as the regular card. The Fernandez for my '88 set has a little bleed from the pen but isn't terrible...the smudge on his face is just on the toploader. Unfortunately the case on the Canseco is scratched up, which was not evident from the seller's scan. Really annoying when it's an "encased" card so the holder is really part of the card. I'm just going to live with it rather than going through all the trouble of sending it back or playing the partial refund game.
T

Dilferules said:
View attachment 116188
Gotta love when the parallel looks practically the same as the regular card. The Fernandez for my '88 set has a little bleed from the pen but isn't terrible...the smudge on his face is just on the toploader. Unfortunately the case on the Canseco is scratched up, which was not evident from the seller's scan. Really annoying when it's an "encased" card so the holder is really part of the card. I'm just going to live with it rather than going through all the trouble of sending it back or playing the partial refund game.
Click to expand...

Since it is PC you might hit that Canseco with some clear car scratch filler. Usually it does a good job minimizing the scratches on slabs and one touches.

WizardofOz1982 said:
Since it is PC you might hit that Canseco with some clear car scratch filler. Usually it does a good job minimizing the scratches on slabs and one touches.
Click to expand...

Thanks for the tip! I may give that a shot, and if it works I'm sure I have a few other cases/slabs I'd like to polish.

Whew one that I thought was lost in the mail showed up today. Good thing because it's a Super Sweet '90s Insert:

Still missing 5 A's from this set - not any real popular players, but these cards are pretty tough to find nowadays.
G

Picked up at a show a few weeks back but pics are from September. LOL

Really like the S2 Player Medallion set and I Lucked in to eBay having all three #1s available.

Was real excited to get these stupid 1994 A's Pogs in an eBay lot. I organize my team wantlist by player, and this pile finished out my needs for FIVE players. Plus it was the last Tony Larussa I needed that was actually made during his managerial stint with the A's. Plus the whole lot was something like $12 shipped.

The McGwire '95 Collector's Choice SE Gold puts me 1 away from completing that team set (but that one is Rickey, ugh), same for the Wasdin '96 Mirror Blue (but I'm not a big enough spender to pick up the McGwire Mirror Blue anytime soon), and 1998 is by far my favorite year for Platinum Medallions. The Ludwick '01 Gold Refractor puts me one away from that team set (only missing Jason Hart). The Cansecos would seem like early '00s "junk GU" but these were deceptively hard to find, especially the Stadium Club. The Gold Label card has 4 different versions, after getting this I am one away from completing that. So I guess this was my "one away" day.

I remember wanting this set when it came out. For some reason, I believe I never got one. it might have been cost, maybe the Seaver/Fisk cards driving it, maybe an early Ozzie Guillen. Now Baines has been added to the HOF list too. The set is oversized, like police cards of that era. What is cool is that each modern player has an all-time great added to their card. There seems to be a correlation between the players for position played. Odd, but cool at the same time. The set is loaded with game action shots too, something pretty uncommon for an oddball set like this. most of them seemed to be chock full of poses.

I found a set for under $10 delivered and felt that was a good buy for something that eluded me for 35 years now! Of course, i'll find out later that I do have the set buried in my boxes of small oddball sets, because I have not looked recently.

Grabbed several of the 2020 Archives autos of Erstad. His first new pack issued card in about 10 years. I suspect I'll see more like that for him since they've sold a bit better than I expected.

Product has been tough to get a hold of. Locally, retail’s not being stocked or wiped as soon as it is, and the bot scalpers seem to be in full force online too. Did manage however, to snag a couple of blasters of Series 2 and Archives from Target and Walmart online, and made a couple of eBay purchases so far.

I’ve had my eye on a 52 Bowman Reese for awhile because I wanted to start PCing him and the artwork of the card really stood out to me. 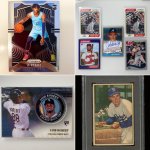 The Brosius is the final A's Starting Lineup card I purchased, but I still have 8 on the way from COMC with their lovely 3-month shipping wait time.

This one arrived the other day, '96 Ultra Golden Prospects Hobby Tony Batista. I've had a heck of a time finding this and the other A in the set, Steve Cox. These were pretty tough (1 in 72 hobby packs, 15 card set) and combine that with nobody bothering to list old "worthless" inserts of players with no hobby following and it results in a hard card to find. Now I just have to find the Gold Medallion version, 1:720 packs oy.

I got into those gold prospects for a short time and remember seeing all of the commons, even Cox. I don't recall who I wanted now either. I would have to see a checklist to recall. I don't think I have it and even if I did, I am not sure which box it would be inside. one of my ultimate goals is to get all of my stars/semis/fan favorites combined. They are all alphabetized, but in dozens upon dozens of different large card storage boxes. Just combining them together will take significant time, space and probably some new boxes.

Yeah they pop up here and there but it's very infrequent, at least nowadays. And I know all about those "organizational improvement" projects. As soon as one part of the collection is re-organized, another part needs it.

I collect some of Hudson/Zito/Mulder after they went to other teams. This particular card was the next to last non-promo MLB Showdown card on my wantlists. The last one I need is a foil Reggie Jackson from the 2003 Pennant Run series. There's a few on eBay but it's hard to bring myself to pay $30 for an MLB Showdown card.

I have a pretty decent Yoenis Cespedes collection, but until today his Topps Black RC was missing. Real happy to get this one.
U

I got this cool Jim Thome card in today: