Em3 said:
I just came across this thread on google. I opened up an old box in one of my A/C storages and found a stack of MLB Showdown 2000 cards. Currently trying to decipher/organize/determine values of them. Looks like two promo cards, about 10~ first editions, a bunch of non first edition player cards, and a ton of the "skill" type cards.

Does anyone know if the "skill" type (defense/offense/ultity) are worth squat or may they be junked?

Also, I can't find any data on the value of a special card. Its # 001/008 Peter Bergeron with a "W" (wizards of the coast) stamp on the bottom left. Anyone have any data on sales`value of this card?
Click to expand...

Yes I do! I'm rather in touch with what's up with most things MLB Showdown-related. You've got quite the rare one there.

This is a good thread about a nice little niche in the hobby. Showdowns are cool.

in your review of all the cards for the master set, I don't see "1st edition" as a separate or parallel set, in the years that there were 1st edition cards put out
how do you look at 1st edition?
A

So, the first edition cards have a small stamp on the lower left portion of the cards that has a 1 in a silver circle, and says Edition around the outside of it. I'll drop a photo of one in here for you.
A poster above said they have a Peter Bergeron with a W symbol on it. Yes, that's the rarest of the WotC promos that were printed in 2000. They were only found in the TopDeck magazine that was published, and only in (I think it was) the October issue of that year. There was one card in the magazine (and an apparently REALLY rare pack of Pokemon in it also), and the hope was to find all 9 different promos. I'm down to needing only one, but your Bergeron could fetch you close to $100 on the Showdown market right now.

You can see on the bottom the embossed "1 edition" symbol/seal. 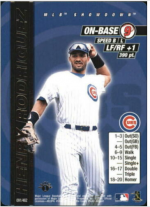 The skill cards won't fetch you much at all. If you sold those as a bulk lot, you might get 4 or 5 bucks for them. There weren't all that may super-expensive strategy cards until Clutch Performance came into being.

The Peter Bergeron promo is rather pricey. That could get close to $100 or more on ebay. The Bergeron is the rarest of the WotC's (the cards with the W on the lower left).
The other moderately priced WotC was the Joe Nathan. The other 7 were not nearly that high (maybe 30-40 bucks now).
You must log in or register to reply here.
Share:
Facebook Twitter Reddit Pinterest Tumblr WhatsApp Email Share Link