I don't have the wright anymore, but I used to have his 2006 Hawaii Trade Conference jumbo (here's a Jeter for reference).

Really great looking card. Do you have it? 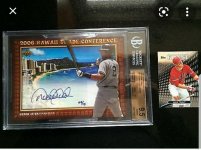 Holy heck, that's a sweet card! And no, I don't have one unfortunately. I only saw one, maybe two ever surface, and I missed out. Bummer! But great card, thanks for sharing!
D

BBCgalaxee said:
I don't have the wright anymore, but I used to have his 2006 Hawaii Trade Conference jumbo (here's a Jeter for reference).

Really great looking card. Do you have it?View attachment 136615

Sent from my SM-G950U using Freedom Card Board mobile app
Click to expand...

I think griffey was a SP

Howdy all! Nothing too glamorous today, but I'm just happy I am able to post at all given my recent schedule. Just a pair of eight card rainbow runs.

2005 Donruss; base, 25th Anniversary Edition /25, Stat Line Career /263, Stat Line Season /77, Press Proof Red /200, Press Proof Blue /100, Press Proof Gold /50, Press Proof Black /25. Complete runs, as there are no 1/1's. I am a bit disappointed with how the photos of the two Stat Line cards came out. They are both foil, with the Season card a particularly nice rainbow-ish foil. Combine that with what I consider poor photos of the second set I will post about below, I really need to rethink the lighting and such here. I'm poor, so I don't have a fancy scanner or camera, but I am sure I can come up with something better. Bear with me here. 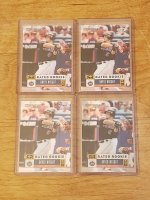 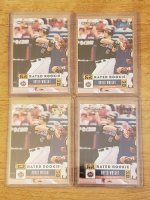 2005 Donruss Champions; base, Impressions, Impressions Red /250, Impressions Blue /100, Impressions Orange /75, Impressions Gold /50, Impressions Green /25, and Impressions Black /5. Also a complete run, as there is no 1/1 parallel. I have to say, the most difficult to find was the orange /75. I don't know what it was, I just couldn't find it anywhere, for years! I slightly overpaid at around $8 +shipping for the card a few years ago, and then right after that of course, I saw a bunch surface....with one on COMC that I think was only $3. Oops! The black parallel isn't exactly black. Obviously that would be too difficult to see against the black logo areas and such, so it is more of a foil-ish darker grey. This is not important at all, I just felt like giving the weird details 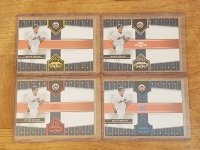 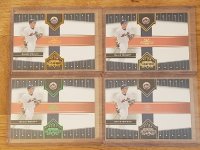 2005 Leaf Certified Materials; base, Mirror White, Mirror Red /100, Mirror Blue /50, Mirror Emerald /5. Pretty apparent I am missing the Mirror Gold /25, as this run could definitely use some yellow! Mirror Black is the 1/1. 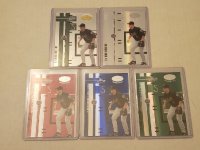 Ok, so I've skipped some other three to four card sets that I have, even with low serial numbering. I just like this one, sometimes simple is best. Just a base, bronze, silver, and gold, easy-peasy. I've come to realize I like colored backgrounds/borders better than cards that only differentiate by having colored foil, like the Donruss or Champions sets. Anyways; base /699, Spotlight Bronze /99, Spotlight Silver /50, Spotlight Gold /25. There is a Spotlight Platinum 1/1, fyi. 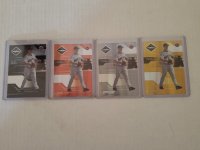 2005 National Pastime. Another small set, but I managed to find the 1/1 parallel, so I of course have to post it! Base /699, Red /150, Blue /1. As usual, I apologize for the less than stellar photos. I tried taking them on a white background, to see if that helped. Apparently not. 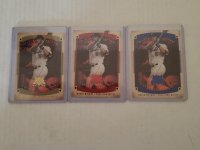 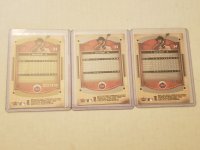 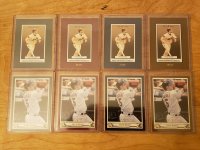 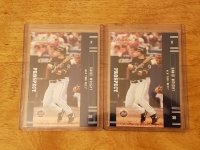 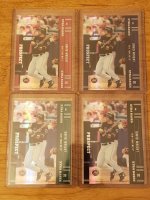 Then it gets a bit confusing.....for me at least. There are these Playoff Champions parallels. I believe they were some sort of redemption based card. But before I even get to the parallel cards, first I need to talk about the Champions Combos cards. According to baseballcardpedia, well, I'll just paste it in here (Playoff Champions Combos is a 120-card set that was part of a contest -- similar to the old Upper Deck Predictors. Each of the 30 MLB teams has four cards (Wild Card, Division, League, and World Series), with the same three players appearing on all four cards. If the team wins the event listed on the card, the collector can redeem it for a special 200-card factory set). The Mets had Mike Piazza, Kazuo Matsui, and David Wright on those Playoff Champions Combos cards. I have all four of those sitting in my COMC inventory, so I'll eventually get around to officially having them in-hand someday.

So I think it went something like this (and anyone with better knowledge can correct me if I'm wrong). Cards of teams that did not make the playoffs in any capacity were unredeemable. Example, Mets cards weren't in the playoffs that year and therefore their Combos card is not redeemable for one of those special factory sets. However, the Houston Astros won the NL Wild Card (back when they were an NL team). Therefore, anyone with the NL Wild Card Astros Combos card could redeem it for a factory set of "NL Wild Card" parallels. They also won the NLCS, so the NLCS Astros Combo card could be redeemed for the "NLCS" factory set, and so on. The cards from those factory sets are considered Playoff Champions parallels.

There are eleven of these parallels, breakdown and print runs are as follows (note, these cards are not stamped, the print runs are just the number of actual redemptions for each);
AL Wild Card /13
NL Wild Card /15
AL East Champs /20
AL Central Champs /27
AL West Champs /17
NL East Champs /18
NL Central Champs /21
NL West Champs /18
AL Champs /12
NL Champs /7
WS Champs /19
Obviously these were no Division Series sets, since there are two per league, so no one team could be the redemption Combos card. I have the following; NL WC, AL East, AL West, NL Central, NL West, WS. I also have the NL East in my COMC inventory. Still have a few to go, but these are tough. I'd LOVE to see if anyone has put an entire set of their player together......that would be quite an accomplishment!! 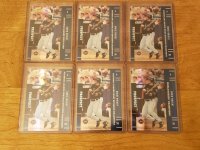 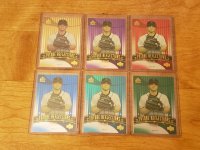 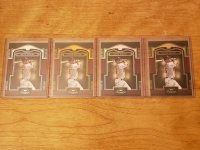