It's been a long time since my last post here. Partly because I've just been busy. Partly because the flow of new cards has slowed to a trickle. And in a related note, Robbie got himself banned from MLB for life. Some incident involving harassment of a woman back in 2014 or so. MLB has not released details, but apparently Manfred had a look at the case and made that decision. I'm not sure what to think. These days an accusation by itself can go a long way, even when it shouldn't. On the other hand it must have been serious to warrant a lifetime ban, right? Right? It is pretty clear that over the years there have been a LOT of accusations, rumors, and what have you when it comes to Robbie. Mostly involving sex. None of it ever really stuck, but this one sure did. At some point you have to wonder...

Well, so it goes. But will I stop this collection? Hell no! And with any luck prices will come down. Yeah right.

The 1989 Star Alomar Brothers Promo, with Autograph. A COA generally comes with these, but of course COA's aren't always worth the paper they're printed on. But I've noticed a lot of these up for sale, from different sellers, and they all have the same COA. Plus there are not a ton of other autographed Star promos being sold. If you're going to fake them, why not Griffey and Thomas instead? So I guess they're probably legit.

In a related note, Beckett lists this mysterious "1992 Star Promos" set, with Alomar included. But damned if I have ever been able to find one, or any info about this set at all. I had assumed it was a bogus set listing, and I still do. But I did see an example of this card, slabbed by BGS, with the title "1992 Star Promos". Now did the Beckett graders know this auto'd card was part of this 1992 set? Who knows. But glad to have an example, since I do think that Star actually did have Robbie sign a bunch of these back in the day. 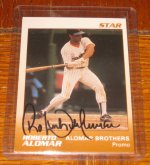 2004 Donruss Studio Platinum Proof /10. Got this in the mail yesterday and glad to add it to the old collection. 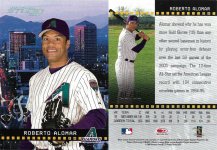 2002 Playoff Absolute Team Tandems Spectrum /100. This was the last one I needed to complete the entire run from this set. Surprising the /100 took so long to find! 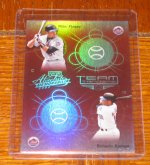 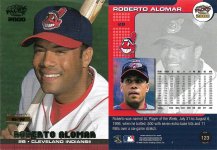 Last and probably least, I finally completed the 2019 Tek run. The swan song for my beloved Tek, it seems. This was a crap set, where Topps just reverted to their default colored parallels. No different patterns at all. But, being Tek, I am glad to have it done. Includes the gold /1.

I was wondering when we'd see this update. I didn't see much about it but I heard there was also another accusation against him from the same time period. I think these things just carry more weight than back in the day, he also didn't seem to deny much so I'm sure there were some behind closed doors conversations between him and the various parties.
I love a good pacific pickup! And you're right the last tek set was so crazy lame it hurt, did they let the guy go who made patterns so they just brought the guy over that does color!?!?

Hah, yeah, I suppose I was procrastinating about updating to this thread. But I still love my collection more than I should, and I really doubt I'll ever stop adding to it.

That 2019 Tek set was abysmal. I remember posting here at the time that Topps should either get back to what made Tek special, or just kill it. I think they listened to me

How are things in the Biggio and Wakefield universes these days?
B

I mostly put a hold on the biggio collection, there's too much to chase and I don't contain myself well only added a handful of nice ones in the past 18mo.
Wakefield collection is good, but slow, I just have such a high percentage not much shows up, there's not much more than 3-5 cards that have been released in the last 4 years I haven't been able to get. He was in flawless the past two years and I missed a version last month from the 2020 release because I confused it with 2019. Looking forward to chase the 2021 t206 variations though!
You must log in or register to reply here.
Share:
Facebook Twitter Reddit Pinterest Tumblr WhatsApp Email Share Link