Aside from my Dodger autograph thread, I don't usually share much of anything else I get, because frankly I assume it is unimpressive to anyone but me. I thought I would share this though. My first thought was I lucked out big time and got a screaming deal, but then doubt started to fill my mind. Maybe I am just so clouded from weird competition for Steve Garvey items that I often overpay and just expect it for anything else. The reality is, I seem to get some more reasonable deals on other things that don't have rabid nutcases overbidding on them all the time (I include myself in on this, but 1 person does not make an inflated price alone)!

I believe these are former Topps "Vault" items, just minus the fanfare of the vault itself. 1975 Hostess progressive color proofs. They look legit, but no Topps holograms or anything like that. Perhaps these sold before they started doing Vault auctions? Maybe this was part of the big 1898 Auction? I got the entire lot for $20.50! I'm pretty happy about that and if I had any thought of this lot going this low, I would have tried to win the other two. I was surprised I even won, so I never even bothered to bid on Otis or Rojas. Lessen learned, always toss out a bid and see what might happen. If that was Garvey, I swear the lot would have gone for $300 or more. Someone who posts on the CU board or Net54 actually has shown the Garvey set, so that one is off the market for now. Still, Carew is popular and a HOFer (Seller sold 2 other sets of semistars and one just barely broke $10 and the other did not!!), so it really makes me wonder what happened here?

Those are impressive. I have a few Topps Vault items. I like to see what other people have for vintage cards and memorabilia. I don't put up pictures to impress anyone with what I have in my collection. My collection is far from impressive. I just show them because people might not have seen something like it before. A few of the cards from my Hogan collection, I've only heard of before and never seen one before or since. Keep showing your collection. There's not enough vintage on this site any way.

dano7 said:
Love the Heilbroner's! Early baseball history and a lot of them are signed by the player! Congrats!!!!
Click to expand...

finestkind said:
Those are impressive. I have a few Topps Vault items. I like to see what other people have for vintage cards and memorabilia. I don't put up pictures to impress anyone with what I have in my collection. My collection is far from impressive. I just show them because people might not have seen something like it before. A few of the cards from my Hogan collection, I've only heard of before and never seen one before or since. Keep showing your collection. There's not enough vintage on this site any way.
Click to expand...

I'd certainly agree that sharing anything is always encouraged, if the person sharing wants to do so. I have always tried to encourage participation of any kind on these sites to keep it fresh. I also don't try to impress usually (obviously my Minor League Dodger contributions are far from impressive), but do like to select items I think others might find interesting. I guess what I really meant yesterday was, if I am not excited about it, it is probably fairly mundane to most and probably not worth the effort to showcase it. For example, today I got an opening day ticket stub for the Dodgers from 1985 and 2 little credit card like membership cards to the True Blue Club. I think this was mostly a 90s/00s team sponsored fan club, but I had not heard much about them. I have always been fascinated by the early 70s Pepsi club stuff though, but I was also a member of the Mariners Pepsi Fan Club in that same time frame, so it is a little nostalgia for me. Neither of todays items are overly interesting, even to me, and certainly not something I would go out of my way to share.

Your Hogan items, in comparison, are often quite unique and even if they are not Trout or Mantle or INSERT LATEST HYPED PROSPECT CANDIDATE HERE, plenty of folks enjoy seeing them. We all have different collecting interests, budgets and goals. Sometimes I have felt small when seeing the massively expensive items being shared on certain sites but I quickly remember and remind myself that I choose what I spend and I enjoy what I allow myself to afford. I don't need 52 Mantles to feel good about collecting. I could probably afford some big guns, but I also might not stay married too long after that if I started down that path.

That's exactly how I feel about collecting. My wife and I had an agreement. That I would ask her if it was ok for me to spend anything over $200.00 on a card. I like to see other vintage collections like the people on the Net54 forum. One guy just completed the entire T206 set with the Wagner, Plank, Doyle and Magie cards. It's great to see people can collect like that. I'm happy with my collection and just like to share it when I show something. But, I still don't understand and never will understand why people drop huge money on new stuff.

My 59th card of this set.....no, I will not be trying to complete it, but look forward to adding a few more.

That's a nice one. Those are great looking cards from that set. Having more than one player one the card and players in action make them much nicer.

finestkind said:
That's a nice one. Those are great looking cards from that set. Having more than one player one the card and players in action make them much nicer.
Click to expand...

Yeah, I always tell myself that I'm actually buying 3 cards, in the one I buy!

I was just checking Ebay to see if there were any new Hogan cards that I could add to my player collection. I found this auction.

Any glare, creases, dust, specs on the card are due to the sleeve or scanner. I am not a professional grader and I do not make any claims on the condition of the card.
www.ebay.com

I've never heard of Slade Hogan. The seller thinks Heggen and Hogan are close enough. I'm not sure if this guy selling is stupid or can't read or just lazy. Check out his other auctions. The players name is right on the card and he can't even get the name right.
S

Was very happy to pick this one up for my Banks run. One that I was not expecting to get since there is only 6 graded a 2 or less in the PSA pop report. This SGC one showed up at a good price so I jumped on it. It also has a clean back with no paper loss, which is also hard to find in the Venezuelan issues. I might eventually send it to PSA for a crossover so it matches the rest of my collection, but for now, I'm going to enjoy it as is. 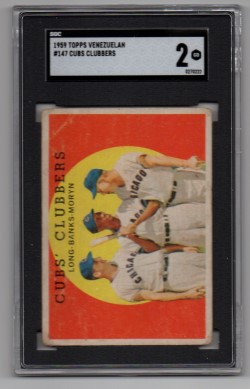 Probably pushing the boundary of vintage here, especially since I have no idea when this card was made. Baker played for LA from 1976-83. If this was made/issued during his playing days, which I am not 100% sure it was, then I'd guess around 80-81 myself. I was just made aware of it today. A blog highlighted it and the owner said someone had sent him one, but also mentioned COMC had it cataloged as 1978. I found it on COMC, saw there was one for sale and bought it.

I live for weird crap like this. I have never heard of it. I don't think it is cataloged in one of the annual card guides. It looks crudely made, even very custom-cardlike, when customs were made by the likes of Broder. Still, it is possible that it was some sort of local area advertising gimmick that dental offices in the LA area were using to entice kids to have good dental habits. Anything to get your kid to brush their teeth, right? Who cares, I had to have a copy once I saw it.

Used my HAPPY25 code to get this 1952 Joe Page with Sain Bio on the back, card. I need the Sain with the Page Bio on the back to complete the 1952 Yankees.

I received my 1934 green back Rabbit Maranville and my 1936 blue back Bill Rogell (even autographed) which COMPLETES MY SET!

Congrats on completing the set!
S

Nice accomplishment on completing the set!

You can't include that card with writing on it in your set!! Nice way to finish off a vintage set, with a signed card.

mrmopar said:
You can't include that card with writing on it in your set!! Nice way to finish off a vintage set, with a signed card.
Click to expand...