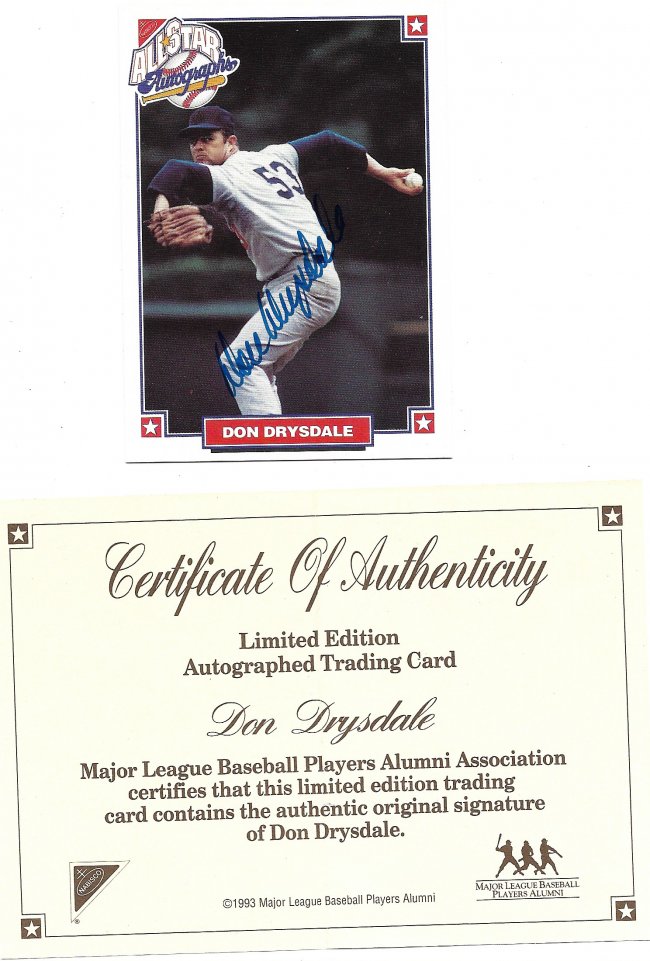 Ah Matt Holliday. After playing with the A's for half of 2009, every subsequent contract he signed had a no-trade clause with a single team on it: the A's. Not a big Billy Beane fan. The Gold Star cards are the team set, and the Cespedes is the Century Silver version 16/25. He has three different "Century" parallels in the set and none of them are numbered to 100, go figure. 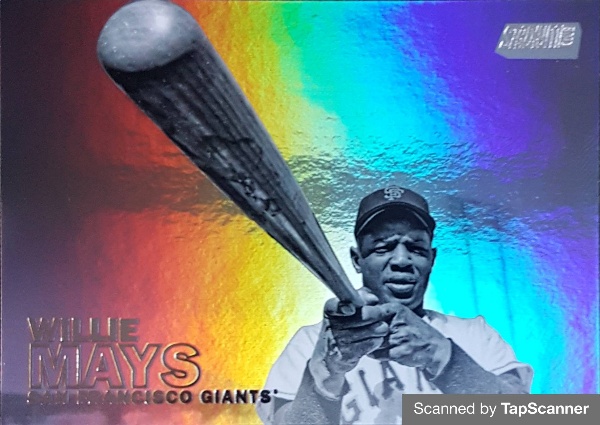 I’ve got a couple of toughies off my list. On the way.

michaelstepper said:
2016 Rainbow foil /25
saw the photo and HAD to have it

That is a cool photo, like he's checking a pool cue

Did you know that he died while this promotion was active. I don't think it affected the number of cards made available (guessing they were all signed ahead of time), but might have driven the choice to pick up him or anyone else in the set. Guessing the Drysdale cards dried up a lot faster than the rest of the gang.

I am beyond happy that this card was released. Otherwise, a certified Drysdale doesn't exist ever (except cut form).

I misplaced this so I had to replace it.

Love the '95 Select Artist's Proofs, I believe the McGwire finishes off the team set for me. The Dilfer is kind of a long story. Like in baseball, the 1999 Bowman Chrome Gold Refractors were all numbered/25. Suspiciously, I had never seen one up until a few years ago, when a lot of those backdoored Leximo sheet-cut cards got out and I picked up one without a serial number. Like the one pictured, it had a terrible refractor line. I suspect there were manufacturing issues that caused this particular card to never make it into packs because, trust me, I would have seen a real /25 Trent Dilfer card from 1999 by now. Anyway, this one popped up with a highly suspect serial number stamped on the back that I am 95% sure is phony, but I bought it on the 5% chance it wasn't just another one of those backdoor cards that somebody added a number to later. I didn't pay much so either way it's an interesting item.

It's just...off. The stamping is sloppy on the 9. Even more oddly, I have one of his regular Bowman Chrome Gold non-refractor cards that is stamped /25 and seems more legit. Maybe there was a factory mixup. So like I said long story, but I'm sure other hardcore player collectors have similar stories about particular parallels where other cards in the set certainly exist but they have never seen one of their player, probably some manufacturing goof. Dilfer has another one with his 1998 Skybox Thunder Rave/150 card...I've owned the Super Rave/25 for 20+ years and have seen multiple copies of that one, but in all this time I've never seen a single regular Rave. Go figure.
W

I think those 1995 Select Artist Proofs are severely underrated. There are only about 240 of each even if they aren't numbered. They don't have the visual panache of the 1993 Finest Rerfractors but they're just as rare.

Nowadays color autos of anybody above the common level usually sell for more than I feel like paying, but the injury-prone AJ Puk isn't exactly on fire right now.

The McGwire finishes off my 1996 Leaf Silver Press Proof A's needs. Still need pretty much all the Golds, though. The Zito is a short print, I can't recall seeing one before. I overpaid (about $20 shipped) but I really like the look of the card and the signature is great. The Street goes nicely with my base auto and die-cut auto from the same set. There's a White Hot 1/1 version so I don't have the rainbow.

One of the iconic autograph sets in my opinion, such a classic design after all these years. 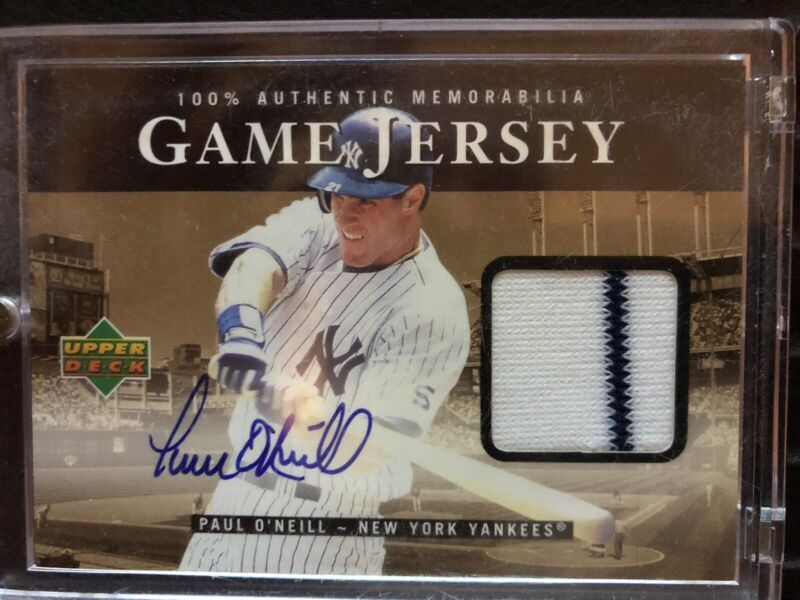 time to find the other parallels

these are nice cards. I had a few of them when I first started collecting hot autos
Drysdale, catfish maybe? I don't recall other than the Drysdale
B

nevermore said:
One of the iconic autograph sets in my opinion, such a classic design after all these years.

Having some fun picking up Graterol cards. He just casually hurls 102mph in the postseason

The Keith Hernandez is Beckett certified. And it's always a good day when you get a Red Label.

Also always a good day when you get a Heritage Chrome Black Refractor. The Luzardo is the top card in the Postseason Topps Now team set. I was disappointed with the player selection, it was just the same 10 guys that Topps puts in all of their sets, none of the mid-season acquisitions: Mike Minor, Jake Lamb, or Tommy La Stella. Who knows if they will even get any A's cards, Homer Bailey and Tanner Roark from 2019 never got one.

Since my 8 yr old son hates my Griffey jr. collection (he told me last week that when I’m old he’s gonna throw them out because he won’t have room in his house lol) and he loves nascar racing, I picked up an extra one of these for him